Megan Fox Spotted With Machine Gun Kelly As They Step Out For A Dinner Date In Santa Monica!

Lovebirds Megan Fox and Machine Gun Kelly aka MGK were spotted together as the two stepped out for a dinner date in Santa Monica. 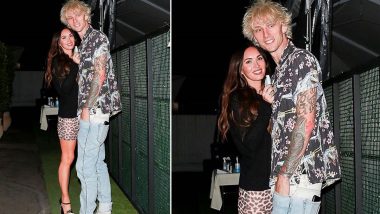 Megan Fox and Machine Gun Kelly’s relationship was official when the former appeared in the American rapper’s music video “Bloody Valentine”. Since then two have been packing PDA and enjoying quality time together. In fact, on the episode of Thirst Tweets for Buzzfeed Celeb, MGK even told fans that he was “locked-in” his relationship with Megan Fox. This lovely couple’s romance definitely appears to be heating up. Megan and MGK were spotted together as the two stepped out for a dinner date in Santa Monica. Megan Fox and Brian Austin Green Part Ways After 10 Years Of Marriage, Confirms the 46-Year-Old Actor.

Megan Fox and her beau Machine Gun Kelly were spotted leaving together from a restaurant and they just couldn’t keep their hands off each other. Megan donned a sexy leopard mini skirt and teamed it up with a black knit sweater. MGK had put up a rockstar look for the date. He had sported a light-washed blue jeans that he paired with a short sleeve button down shirt. The duo was all smiles as they posed for the paparazzi. Megan Fox and Machine Gun Kelly Indulge In a Steamy Kiss In His Drunken Face Music Video!

(The above story first appeared on LatestLY on Oct 11, 2020 10:21 AM IST. For more news and updates on politics, world, sports, entertainment and lifestyle, log on to our website latestly.com).