Michael Pena's scenes in Ant-Man movies are terrific and it's time we reminisce a few of them. After all, it's his birthday and he deserves to be celebrated. 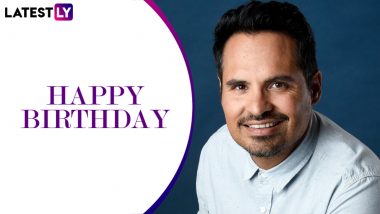 Popular American actor, Michael Pena celebrates his birthday today and while we wait for Ant-Man 3 to start rolling, here's going back in time to witness some of his best scenes. Michael has terrific comic timing and that's pretty much established in his Hollywood career spanning so many years. While he usually plays a supporting character, his roles and inclusion are always crucial to the storyline. He plays Luis, Scott Lang's former cellmate and now his business partner in Ant-Man and he quintessentially brings comic relief in the movie. Ant-Man 3 Casts Lovecraft Country Actor Jonathan Majors in a Lead Role.

Since MCU is mostly restricted to being PG-13, Michael's character has comical undertones and he's essentially added for comedy. His scenes in Ant-Man movies are terrific and it's time we reminisce a few of them. After all, it's his birthday and he deserves to be celebrated. So go ahead and have a look.

His Storytelling from Ant-Man

The One From Ant-Man & The Wasp

Let's Not Forget His Oatmeal Packets

With Ant-Man 3 now officially in works, let's hope Pena's Luis returns for more hilarious banter with Scott Lang! Yes, the wait for it is still very long but trust Luis to entertain you till then. On that note, here's wishing tons of happiness and good luck to Michael Pena on his special day. Happy Birthday!

(The above story first appeared on LatestLY on Jan 13, 2021 09:30 AM IST. For more news and updates on politics, world, sports, entertainment and lifestyle, log on to our website latestly.com).