Pop star Miley Cyrus was spotted around town with British pop-rocker Yungblud, setting off rumours of a new romantic spin in her life. Cyrus, 28, was celebrating the 15th anniversary of her popular character of Hannah Montana at a club in the city with close friends, including the 23-year-old British singer, who has previously dated Halsey. 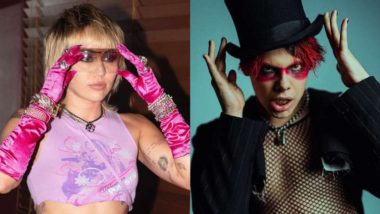 "She was very happy and in her element. She was belting out songs at the table and full of life," an eyewitness told eonline.com. "There was a vibe between them and they didn't take their eyes off of each other," the witness continued, noting that he touched her face, too. "It definitely looked like something is going on between them," the eyewitness added. Miley Cyrus Birthday: The Wackiness in Her Persona Transcends in to Her Red Carpet Outings (View Pics).

A source closer to Cyrus, later told the publication: "Miley and Yungblud were definitely flirting with each other, but they are not dating. It was just a fun night out with friends, but there is definitely chemistry there.".

(The above story first appeared on LatestLY on Mar 27, 2021 11:07 PM IST. For more news and updates on politics, world, sports, entertainment and lifestyle, log on to our website latestly.com).