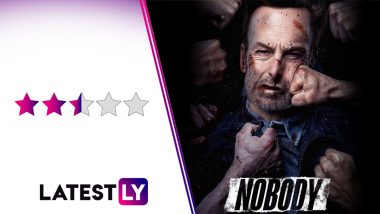 Nobody Movie Review: Bob Odenkirk, who has been wowing us with his portrayal of Saul Goodman in Better Call Saul, decides to now let his fists talk with Nobody. Directed by Ilya Naishuller. Nobody belongs to what is becoming a new sub-genre in action movies of an actor with no perceived action-image turning into an actor star - a trend glamourised by Liam Neeson (with Bruce Willis kick-starting it with Die Hard). Then there is also the major influence from Keanu Reeves' John Wick series. As an action movie, Nobody has a few thrilling, enjoyable subversive moments, but it lacks the freshness of a Taken or the reinventive charm of John Wick. Bob Odenkirk Opens Up About His 21-Year Old Asthmatic Son Nathan Who Survived the Novel Coronavirus.

Hutch Mansell (Bob Odenkirk) feels like an ordinary family man, seeking a quiet livelihood and going through a typical mid-life crisis. Or so, we think. There are hints that he is a dormant volcano waiting to explode. That trigger comes when a burglary happens in his house. Hutch has the opportunity to tackle one of the burglars, when his young son Brady (Gage Munroe) takes down the other one.

He doesn't, though, leaving his son to get punched on the face and the burglars fleeing with some cash. Hutch's inaction is seen as a act of cowardice by his son, the investigating police officer, his bullying brother-in-law and to some extent, even his wife (Connie Nielsen). What most of them don't know is that there is nothing cowardly about this man - Hutch is just trying to hide a dark past that ultimately boils over when he realises his daughter's kitty cat pin is also gone!

There is no doubt that Nobody is heavily influenced by John Wick, of having a protagonist who once used to be a terrifying figure in the dark circles but trying to lead a quiet life. I could also draw parallels of Hutch's life to that of Mr Incredible to The Incredibles - someone struggling to hide his real persona within a boring everyday family man facade. Hutch's initial transition also reminded of Michael Douglas' D-Fens Foster from Joel Schumacher's criminally underrated 1993 film Falling Down (also remade in Marathi as Dombivli Fast), if Foster had some hidden action skills within him.

One credit I have to give Nobody is that it does a good job of making a credible action hero out of Saul Goodman! Odenkirk has put in much efforts physically to look the part, and yet the director has made sure that the transition from a 'Nobody' to a killing machine isn't out of the blue. Which is what makes the first action scene in the film inside a bus so great. Hutch's struggles to land punches on a bunch of hooligans, in a fight that he wants to happen, comes across as gritty, realistic and thereby, highly exciting. The transition process has now switched to the second gear. Chrissy Teigen Binge-Watches Better Call Saul, Reveals Her Favorite Character From the Show.

From hereon, the peeling away of Hutch's fake cover into what he actually is goes through some very familiar beats that makes Nobody a very run-of-the-mill kind of film within its subgenre. From a man finding it difficult to get back to his old feet, Hutch almost becomes an indestructible mean machine thereby discarding any tension that comes with the shift to his persona. The main antagonist Yulian Kuznetsov (Aleksei Serebryakov) is as generic a Russian crime-lord as they come in these Hollywood actioners, initially an imposing figure but ultimately a very two-dimensional villain that is easily dispatched off. Even Hutch's family gets less scope in the story post the change of his personality.  The soundtrack trying to make the movie more errr... hip, begins to grate on your nerves.

Where Nobody scores is in the action sequences, the camerawork and Odenkirk's believable tough-man act. Not to mention, a scene-stealing turn from the great Christopher Lloyd. The final fight sequence set in a warehouse that turns Home Alone's booby traps in some kind of freaking gory, absolutely bloody fun, is bound to win over the action geeks. It is just that Nobody got nearly everybody to beat it in such races before, without the movie trying to set its own race-track.

Nobody does a good job of turning Bob Odenkirk into a believable action hero, while serving a couple of entertaining fight sequences. Where it falters is in its struggle to step out of the shadow of John Wick and Taken and instead, remains a less-appealing cousin of both the fan-favourites.

(The above story first appeared on LatestLY on Apr 20, 2021 04:00 PM IST. For more news and updates on politics, world, sports, entertainment and lifestyle, log on to our website latestly.com).