On Sylvester Stallone's Birthday, Talking About 5 of His Most Entertaining Movies 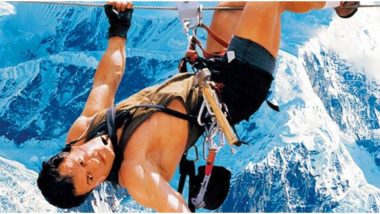 Sylvester Stallone turns 74 today. For decades, the actor has been the favourite-action stars of the fans. He has inspired a plethora of next-gen action heroes across the globe. He is not just a bankable actor but his filmography is rich with writing and directing credits. He has written over 30 titles, while he has directed 10 titles.

The road to becoming a globally recognised action star hasn't been easy. "I abused my body so much throughout y career that I am literally held together by glue. The stuff I took thickens the bones and reinforces the tendons," the actor has said in an interview.

But, if you ever looked up to Stallone and thought you'd like to look like him and people laughed at you, then those people were wrong. Because, the actor intentionally got the kind of physique that would inspire people to look like him. He said in an interview, "I never had extraordinary genes or great bone structure, and I'm still very thin. What I try to do is create a body that every man can look at and say, "You know, with a certain amount of dedication I can achieve the same thing." I try to keep it in the realm of athletic, rather than unapproachable."

So, today, in honour of this extraordinary actor, we are going to talk about his best films.

Of course. Like there is option number 2 where we start off this list with some other movie. Duh. BTW, it was Stallone who paved a path for future Rambo films. "In the book, Rambo gets killed. I thought it was not the proper message. There had been close to 200,000 suicides by returning Vietnam vets. I said, "Why don't we take him right to the edge without annihilating him?" Quentin Tarantino said, "You're a coward, you should have killed him!" I said, "Quentin, you're a lunatic. I want to do some sequels, brother," the actor has said.

Okay, the movie might not have been critically acclaimed. Fine, the movie was even nominated for Razzies for Worst Film in 1994. But, swear to God, and tell us after watching the movie that you did not enjoy every minute of its...it's madness. Stallone co-wrote the screenplay.

Do we even need to talk about this. "People accept Rocky Balboa as authentic. I can't tell you how many people have come up to me and asked about my boxing career. It's like they really want to believe that Rocky exists," Stallone has revealed.

You might not find many takers for this movie. Yes, this one was also nominated for Razzies. But, please, what a fun, fun movie. Entertainment.

Stallone and Kurt Russell pair up for this buddy cop-comedy. Stallone has also worked in the action-comedy, Stop Or My Mom Will Shoot. But he did not feel the genre was right for him. "I enjoy comedy very much, but it just wasn't right for me. Sometimes it's better to just stay focused and do what you're really passionate about," he has said.

BTW, recently on his Instagram page, the actor revealed that he is working on a director's cut of Rocky 4, which will be and we quote, "amazing". We are looking forward to that.

(The above story first appeared on LatestLY on Jul 06, 2020 09:47 AM IST. For more news and updates on politics, world, sports, entertainment and lifestyle, log on to our website latestly.com).