The film is being considered to be one of the most sensitive performances of the actor's career. It has also won him a nomination in the best actor category at the Academy Awards 2020. 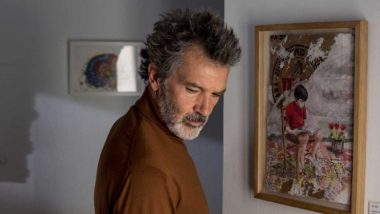 Antonio Banderas won the best actor honour at Cannes Film Festival 2019 for his performance in the Spanish film Pain and Glory and finally, the Indian audiences can enjoy watching the actor's superlative performance on big screens as the film is all set to release on January 31. In the film, which also stars Penélope Cruz, Banderas plays a director who reflects on the choices he's made in life that finally help him to find himself. The film is being considered to be one of the most sensitive performances of the actor's career. It has also won him a nomination in the best actor category at the Academy Awards 2020. Once upon a Time in Hollywood Backlash: Antonio Banderas Supports Quentin Tarantino, Says ‘I Think an Artist Should Be Free'.

The film's trailer opens with Banderas'Salvador floating in a pool as he reflects on defining moments of his life. Not long after that, we see him with his elderly mother who tells him he has not been a good son. The trailer shows us his character's journey as it shuttles between past and present in an amazing montage. The film also stars Asier Etxeandia, Leonardo Sbaraglia, Julieta Serrano, Raúl Arévalo and Asier Flores in key roles.

This is being considered to be Antonio Banderas' best film in his longstanding career. The film is a meta-drama on director Pedro Almodóvar's experiences. After winning the best actor honour at Cannes, the actor said, "Almodóvar is my mentor. We have been friends for 40 years... I saw things in the script that I didn't know about him. He was very sincerely confronting himself in front of an audience in the film." Pain and Glory is being distributed by PVR Pictures in India and is all set to hit the screens on January 31.

(The above story first appeared on LatestLY on Jan 28, 2020 07:58 PM IST. For more news and updates on politics, world, sports, entertainment and lifestyle, log on to our website latestly.com).