People We Hate At The Wedding Movie Review: Kristen Bell-Allison Janney Starrer Is Decent and That's About It! (LatestLY Exclusive)

People We Hate At The Wedding starring Allison Jenney, Kristen Bell, and Ben Platt, is just another family drama you don't mind watching once. There's no repeat value attached to it. The movie streams on Amazon Prime. 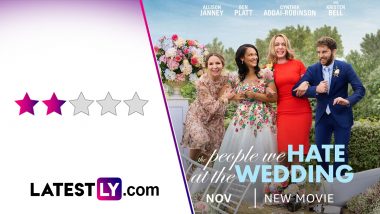 People We Hate At the Wedding review

People We Hate At The Wedding Movie Review: Watching a few family movies is like eating Maggi. You know nothing great can come of it and yet you go through it for the feel-good factor at the end. People We Hate At The Wedding falls in the same category. The obvious takeaway here is everything gets better in the end if we try and that is a feeling we can all rally behind. Disney D23 Expo: Chadwick Boseman, Idina Menzel and Kristen Bell to Receive Disney Legends Award.

As I said, it's nothing we haven't seen in other movies. The step-siblings aren't on the best of terms with each other, the mother is getting entangled in a fling with her ex-husband, and the seemingly perfect daughter turns out to be not-so-perfect (conventionally speaking), a good man is getting sidelined in favour of a married philander and a whole lot of preaching.

Such movies score in the way they are executed. It's nice, and soft which increasingly moves towards the heart-warming category to climax on a happy ending frame. You don't expect anything extraordinary from these movies and they fulfill that promise. This movie is a perfect example of that.

What I did miss here is the lack of humour. It could very easily be a family comedy but it didn't. These movies deserve some wisecracks to get you more invested in the predictable narrative. That's the biggest drawback of this movie. Coming from the Set It Up director Claire Scanlon, it sure is a disappointment. Also, I feel the story doesn't do justice to the title People We Hate At The Wedding. It gives the impression that it will address all the craziness we see at weddings but it just got focused on the mother and her three kids. The insta reels by influencers on the same theme are far more interesting and above all, funnier! Kristen Bell Breastfed Her Husband Dax Shepard for This Reason.

Watch the trailer of People We Hate At The Wedding

Performances are obviously the key with everyone doing their part perfectly. Bell is quite likable here despite her characters' obvious flaws, Platt's sassiness is on point while Allison Janney is loveable. Rest make this movie a nice one-time watch.

-film title could have been better

(The above story first appeared on LatestLY on Nov 18, 2022 08:06 PM IST. For more news and updates on politics, world, sports, entertainment and lifestyle, log on to our website latestly.com).