Ringo Starr Birthday Special: Interesting Facts About the Beatles Drummer that We Bet You Didn't Know

From marrying a Bond girl to his regret of not being able to collect Beatles memorabilia, let's have a look at some lesser-known things about the very famous musician. 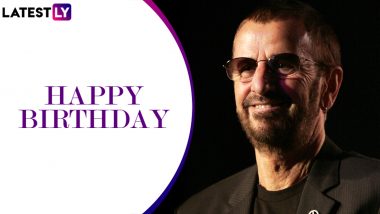 Ringo Starr born as Sir Richard Starkey MBE celebrates his 80th birthday today and it's time we appreciate the legend that he is. The well-known Beatles drummer continued to enjoy popularity even after the band's breakup in 1970. As per his Wikipedia page, his most successful UK single was Back Off Boogaloo, which was able to secure number two position on the charts. He also achieved commercial and critical success with his 1973 with his album Ringo, which was among the top-ten release in both the UK and the US. Former Oasis Frontman Liam Gallagher: ’We Didn’t Make Really Great Records, We Weren’t Pink Floyd or The Beatles'.

Though Starr struggled with multiple health issues in his life, he continued to fight and tackled them one at a time. While he was immensely praised for his drumming skills and we all are aware of that, this time let's explore some of the lesser-known chapters of his life. Have a look at some of the interesting facts about the musician that we bet you didn't know.

Even a musician as popular as Starr has some regrets. His being the inability to collect Beatles memorabilia. While he collected few, he gave them away without realising how much it would mean so much to him someday.

His Donation to the Metropolitan Museum of Art

A gold snare drum by Ludwig that was presented personally to Starr in 1964 by the drum company was loaded by him to the Metropolitan Museum of Art. Since the musician always used the same brand's drums for all his tours and appearances, they considered gifting him one - in gold of course.

Starr married the former Bond girl, Barbara Bach who shared the screen space with Roger Moore in The Spy Who Loved Me.

The Influence He Continues to Have

He's a lefty drummer who continued playing on a right-handed drum set and that helped him create his own playing style that continues to inspire the new musicians and drummers even today.

His earlier experimentation with computer-created art continues even today. He still creates and sells art pieces to this day and it's a mere hobby for him.

To celebrate his birthday this year, Starr has planned an online celebration to benefit the Black Lives Matter movement. He has asked fellow musicians including like Paul McCartney, All Starr Band guitarist Joe Walsh, Gary Clark Jr, Sheryl Crow, Sheila E and Ben Harper to give performances from home, and the show will also contain new concert footage. "I’ve asked my friends [to play at home], or send me footage from a show they’ve done. I’m using some of mine from the Ringo Starr & His All Starr Band tour last year, and I’ll be introducing," he said in his recent conversation.

(The above story first appeared on LatestLY on Jul 07, 2020 10:10 AM IST. For more news and updates on politics, world, sports, entertainment and lifestyle, log on to our website latestly.com).