Robbie Amell Birthday: 5 Movies of the Canadian Actor that You Must Watch!

As Robbie Amell gets ready to celebrate his big birthday, here's looking at some brilliant projects that he was a part of. 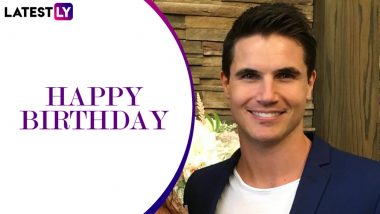 Robbie Amell, the Canadian actor known for playing Firestorm in the CW  series, Flash celebrates his birthday on April 21. The handsome hunk who's also related to the Arrow star, Stephen Amell is quite a charismatic actor blessed with incredible good looks and a physique that would put all men to shame. Robbie is also a fine actor though Hollywood is yet to utilise his potential fully. This reminds us to name five of his best movies wherein he impressed us with his acting proficiency. Greg Daniels Reveals Robbie Amell’s Character Nathan Brown in ‘Upload’ Is Inspired by His Barber.

As Robbie Amell gets ready to celebrate his big birthday, here's looking at some brilliant projects that he was a part of.

The teen horror Netflix film sees Amell as Max, a member of Bee's cult who torture Cole for their demonic ritual. The movie received positive reactions from critics and while Amell's role was restricted, it was a memorable one nonetheless.

This 2019 release was a feature-length version of the 2016 film of the same name. Amell plays the role of Connor Reed, who gets involved with the police for a crime that was extremely that wasn't even big. This was a crowd-funding movie and its spinoff series was in the works at Quibi. However, there has been no update on that.

When We First Met

A romantic comedy that sees Robbie as Ethan. It revolves around a man who gets an opportunity to travel back in time and keep correcting the events until he gets it right. The movie is available to stream on Netflix.

A sci-fi fantasy drama where Amell plays Paxton, who tries to protect an enchanted mirror from the evil beings. While the movie didn't receive any good reviews, Amell's character and performance were worth admiring.

This is the story of Mandy who is going to the coolest party with a rather hot guy. But what happens when she gets grounded? Well, then she gets help from her friends and together they have a blast throughout this romantic comedy.

Well, we hope this hunk has a blast on his special day and that he keeps displaying his talent in all his future movies. Happy Birthday, Robbie Amell.

(The above story first appeared on LatestLY on Apr 21, 2021 10:00 AM IST. For more news and updates on politics, world, sports, entertainment and lifestyle, log on to our website latestly.com).

Comments
Tags:
Code 8 Picture This Robbie Amell Robbie Amell birthday Robbie Amell movies The Babysitter The Hunters When We First Met
Comments
You might also like