Emmy Award-winning writer Greg Daniels says his barber has inspired a character in his show "Upload", though he hasn't informed the guy yet. Talking about his inspiration behind Robbie Amell's character Nathan Brown in Upload. 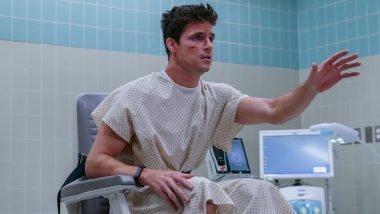 Emmy Award-winning writer Greg Daniels says his barber has inspired a character in his show "Upload", though he hasn't informed the guy yet. Talking about his inspiration behind Robbie Amell's character Nathan Brown in "Upload", Daniels said: "The character of Nathan, who is the guy who gets uploaded, is actually initially based on my barber in Los Angeles who is a very attractive Persian guy and he doesn't know that I've based this on him." James Gunn Reveals Groot’s Favourite Guardians Character and It’s Not Rocket!

"But it was in the earlier drafts and I also wrote a lot of it in Westwood, California which is like the big Persian community center. So, and part of it was in the early drafts was that he was a bit of a fish out of water because he showed up in his girlfriend's family's version of the afterlife which wasn't really his cultural situation," added Daniels, creator and executive producer of "Upload". Avengers: Endgame Was this Marvel Character’s Last Movie in MCU, May Leave the Universe Very Soon.

Created by Daniels, "Upload" is a quirky sci-fi comedy, set to launch on May 1 on Amazon Prime Video. The series follows the life of a young app developer, Nathan Brown, who ends up in the hospital following a self-driving car accident, needing to decide his fate. The Amazon Original show also stars Andy Allo, Kevin Bigley, Owen Daniels, Allegra Edwards and Zainab Johnson. It is set in the future (2033) where technological advancements such as hologram phones, 3D food printers and automated grocery stores are the norm, and humans can choose to be "uploaded" into a virtual afterlife when they find themselves near-death.

(The above story first appeared on LatestLY on Apr 29, 2020 12:23 PM IST. For more news and updates on politics, world, sports, entertainment and lifestyle, log on to our website latestly.com).