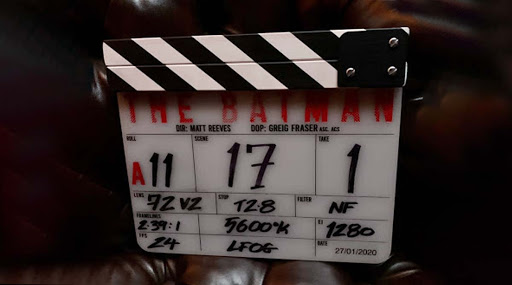 Robert Pattinson in and as The Batman sounds slightly weird. In fact, when his look from the movie leaked out, some were super excited while others had reservations. The film has now officially gone on the floor today with director Matt Reeves revealing the same on Twitter. The image has a leather cushioned chair with clapboard on it. Apart from the quite artistic The Batman logo in red, it also has the Roll presence. So, this is shot on film and not digitally. Matt Reeves' Batman Script is 'Beautiful, Dark and Moving', Says Colin Farrell

The Batman is making a lot of noise because of its casting. This standalone film was supposed to happen with Ben Affleck who played the aging caped crusader in Batman Vs Superman and Justice League. But things changed and now we have a much younger Robert picking up the vigilante's role. Collin Farell plays the Penguin in the film with Zoe Kravitz a Katwoman, Paul Dano as the Riddler and Jeffrey Wright as Commissioner Gordon.

Speaking about his role, Pattinson told Vanity Fair, "In the last five or six years, I’ve almost exclusively played weirdos. It was almost a relief to be like, ‘At least I’ve got Dior coming out, so I don’t look like I’m just completely enveloped by the dark side yet."