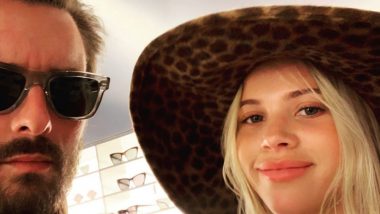 Scott and Sofia are no longer together, it seems (picture credit - Instagram)

Another celebrity relationship has run its course, it seems. Sofia Richie and Scott Disick are reportedly no longer together. They dated each other for nearly three years, but have now decided to go their separate ways, according to a new report by Page Six. The main reason behind the split is reportedly Scott's "past issues", which led him to rehab recently. "Scott had gone back to his old ways, and Sofia got fed up,” a source was quoted by the portal. That's not all. The report further states that Scott's ex and the mother of his three children, Kourtney Kardashian, also had to do something with his and Sofia's break-up. “Kourtney didn’t make it easy for her and you can only tolerate that kind of treatment for so long,” the source further said.

It was on April 28, that is a few weeks back that Scott checked himself into All Points North Lodge rehab facility in Colorado. According to a statement given to HollywoodLife by Scott's lawyer, it was alcohol and drugs were not the driving factors. He was not able to deal with the loss of his parents, Bonnie and Jeffrey Disick, who died three months apart from each other in October 2013 and January 2014. Sofia Richie Gets an Amazing Birthday Gift from Boyfriend Scott Disick.

“In an effort to finally come to terms and deal with the pain that Scott has been silently suffering for many years due to the sudden death of his mother, followed by the death of his father 3 months later, Scott made the decision to check himself into a rehab facility last week to work on his past traumas,” his lawyer said in a statement that was issued a couple of weeks ago. “He did not check in for any alcohol or cocaine abuse. Shockingly as a result of the HIPA violation of the facility and his violation of privacy, he has checked himself out and is immediately returning home. We are alarmed by this extreme invasion of privacy and plan to take immediate legal action,” the statement further read.

Now, it looks like Sofia and Scott were not able to work things out and have apparently decided to call it quits. Both of them haven't given any official statement so far.

(The above story first appeared on LatestLY on May 28, 2020 12:43 PM IST. For more news and updates on politics, world, sports, entertainment and lifestyle, log on to our website latestly.com).