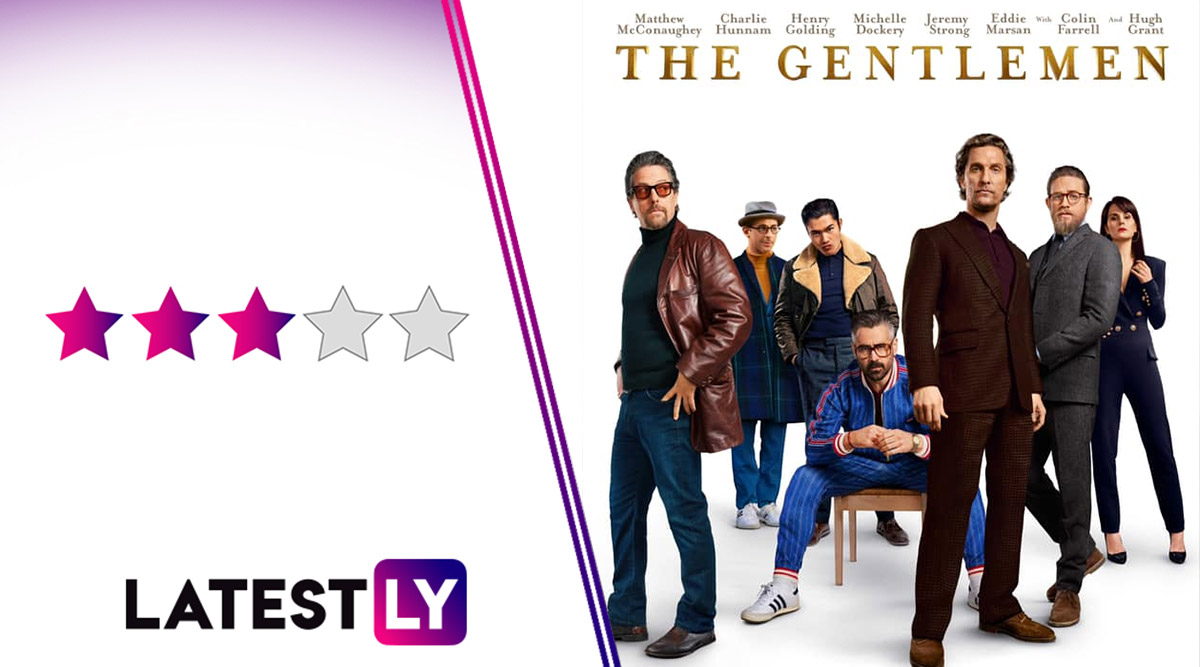 The Gentlemen Movie Review: After delivering a billion-dollar hit in the Aladdin remake, Guy Ritchie returns to his crime caper genre with The Gentlemen. Ritchie who made a mark for himself in the genre with cult classics like Lock, Stock and Two Smoking Barrels and Snatch, had veered away from this kind of movies with more Hollywood blockbuster stuff. It wasn't a move that really worked for him, so I am kinda glad that Ritchie returned to his roots and that The Gentlemen turned out to be a pretty fun venture. The Gentlemen: Originally British, Here’s Why Matthew McConaughey’s Character Was Changed to American in the Guy Ritchie Film.

Mickey Pearson (Matthew McConaughey), a high-stakes cannabis dealer, is accosted in his own pub by an unknown man, the fate of which is not shown till later. The next scene we see Mickey's right-hand man, Raymond (Charlie Hunnam), visited by a slimy investigator Fletcher (Hugh Grant), who claims he has written a screenplay based on the happenings that took place in the past few days.

Fletcher's story involves Mickey and his dealings with a sneaky billionaire Matthew Berger (Jeremy Strong), a feud with a top editor (Eddie Marsan) who hired Fletcher, and a Chinese mobster Dry Eye (Henry Golding), who wants to buy him out. Apparently, Fletcher has found some really shady dealings of Mickey and wants 20 million dollars to keep his mouth shut.

Anyone familiar with Ritchie's crime movies knows the kind of film-making style that he often opts for. So there is that snazzy editing cuts and musical cues that jazz up the scene. We have enough expositionary narration told through a very unreliable narrator, who often makes certain events sound spicier than what really happened. The dialogues are loaded with snarky wit, and sometimes, do becomes a bit more verbose. And yeah, there is plenty of black humour in the proceedings, another trademark Ritchie trope. You also need to overlook some very obvious racial and gay slurs in order to digest the humour of the film.

Like with Snatch and RocknRolla (a really underrated Ritchie film), it is difficult to catch up with the various characters and plotlines that the movie throws upon you in the first act. The story is very confusing and you really need to keep your eyes and ears on keen alert to get through the various accents and verbal diarrhoea to understand what's going on. Guy Ritchie Goes Back to Gangland with Colin Farrell in ‘The Gentlemen’.

But once you settle in (and really, really overlook the racism), then The Gentlemen offers you a very thrilling ride in the second and third acts. I believe the pace and the interest pick up once Hunnam's character, who mostly was a reluctant listener's to Fletcher's story till then, starts getting involved in the goings. From thereon, it is one engaging sequence after another, with a couple of terse moments in between. The coolness, that Ritchie's characters often love to display, in which certain violent acts are carried out is not for everyone's taste. If you can digest that, then you can be in awe of how Ritchie uses music, slow-motion, and black comedy to make these scenes look so unpredictable.

Watch The Trailer of The Gentlemen:

As for the plot, Ritchie keeps the suspense alive till the end, though you may feel disappointed with the reveal that is not exactly ground-shattering. Then you realise that the strength of the film mostly lies in the humour and the actors who bring Ritchie's crazy characters to life.

Out of the bunch, Hugh Grant steals the show with a very campy performance, that is entertaining right from the moment he walks into Raymond's house. As the protagonist of the piece, Matthew McConaughey underplays his American gangster in the beginning, only to let him explode to great effect in the later portions. Charlie Hunnam is terrific as Raymond, often getting away with the best scenes. Colin Farrel makes an impact on his brief role. Eddie Marsan and Henry Golding also deliver on their roles well.

Like with most of Ritchie films, the female representation is severely lacking in The Gentlemen (duh!). But Michelle Dockery gives a very commanding performance as Rosalind, Mikey's wife, whom he cares about the most.

- The Characters and Performances

- The Thrilling Second and Third Acts

- The Racist and Homophobic Jokes

Fans of Guy Ritchie brand of cinema would be glad to know that The Gentlemen is a back-to-form return for the director. While not in the same league as Snatch, The Gentlemen goes for the kill with its risque humour, camp performances and its colourful, detestable characters.