The Unbearable Weight of Massive Talent is a film directed by Tom Gormican. It stars Nicolas Cage, Pedro Pascal, Tiffany Haddish, Lily Sheen and Sharon Horgan. The movie is out in theatres right now. 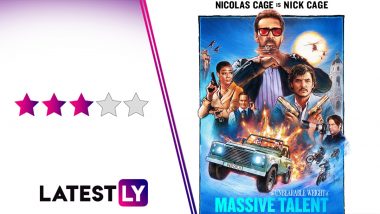 The Unbearable Weight of Massive Talent Movie Review: The past few years we have seen the Nic Cage renaissance take place, and it has been one glorious ride. With movies like Mandy, Pig and Color Out of Space, Nicolas Cage has put out some great and enjoyable watches back-to-back. So what better way to celebrate that actor than making a film where he stars as himself? The Unbearable Weight of Massive Talent: Nicolas Cage and Pedro Pascal Steal a Truck in This New Clip From Their Upcoming Film! (Watch Video)

Directed by Tom Gormican, The Unbearable Weight of Massive Talent sees Nicolas Cage play a fictionalised version of himself and also star as the figment of his imagination, Nicky Cage. Nic Cage’s career is on the slump and no one is offering him any roles in Hollywood. As a last attempt at getting something worthwhile, Cage agrees to attend the birthday party of his superfan Javi Gutierrez (Pedro Pascal) for $1 Million dollars. Things take for a wild turn when Cage is then taken over by the CIA and learns that Javi is a notorious crime lord and now he has to take him down.

Nicolas Cage gives it his all here. Honestly when I first heard about the movie, I thought it would be a pretentious mess seeing how Nic Cage is portraying himself, but no, he actually gives a great performance. The best way to describe this would be that it’s a celebration of everything that is Nic Cage, and I couldn’t be more happy seeing it.

Not only just his acting, but the way he is developed throughout The Unbearable Weight of Massive Talent is very well done. That development is help brought by his interactions with Pascal’s Javi Gutierrez. Their chemistry is the highlight of this film and it makes for some extremely funny scenes that will leave you in stitches. For example, one particular scene saw Cage and Javi take LSD and think there were two people following them. That entire sequence was a riot.

Pascal is also greatly charming in the role, like always of course. Playing Cage’s superfan, he strips himself off his playboy persona and lets his guard down. In those scenes you learn so much about him as a person, and that vulnerability makes him seem relatable in a way. If I met my favourite actor, I would react in the same way too.

The story also presents itself as a good buddy comedy, but the last 20 minutes take for a wild turn that stops The Unbearable Weight of Massive Talent from being great. For the entirety of its first half, you are treated with a tone of just two friends hanging out with the CIA plot in the play, nothing too big. But the entire second half takes for a turn when it suddenly turns into an action film.

What worked in The Unbearable Weight of Massive Talent was when it was being meta about Cage’s Hollywood career, but once that’s stripped away, it turns into a bit of a mess. You have car chases taking place, people getting shot, I love some action but here it felt way too out of place. Tiffany Haddish is in the film as well playing the role of CIA operative Vivian, and even her sendoff felt lackluster.

There is the introduction of a villain as well, that while watching it I just couldn’t care. It feels like the movie tried wrapping up way too many things, and ultimately lost track of itself in those final scenes. The Unbearable Weight of Massive Talent Movie: Review, Cast, Plot, Trailer, Release Date - All You Need to Know About Nicolas Cage and Pedro Pascal's Film!

Thankfully, it’s just the last 20 minutes as the remainder of the movie still maintains itself as an enjoyable time. It works the best when it’s just Cage and Pascal doing their thing, and that’s what The Unbearable Weight of Massive Talent should have been from start to finish.

Can Be Extremely Funny

Tonal Shift in Second Half

(The above story first appeared on LatestLY on Apr 22, 2022 11:16 AM IST. For more news and updates on politics, world, sports, entertainment and lifestyle, log on to our website latestly.com).