Actress Tiffany Haddish has come out on facing physical abuse as a child by her mother before she and her siblings were sent to foster care. "She knocked me out like, straight punched me. 'Cause she couldn't use her words'. 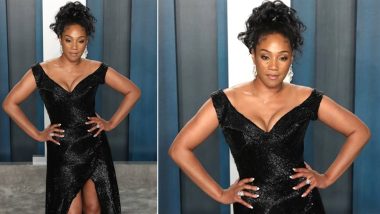 Actress Tiffany Haddish has come out on facing physical abuse as a child by her mother before she and her siblings were sent to foster care. "She knocked me out like, straight punched me. 'Cause she couldn't use her words'," An emotional Haddish said in an interview with Kenny Burns on Instagram, reports aceshowbiz.com. She added: "Here you go from a woman who's like, owns two properties, has her own business, also a manager at the U.S. post office, has an expensive vernacular. (Then) she has this car accident and she has to learn how to walk, talk, eat, everything all over again. Everything she had taught me at that point, I'm teaching her." Keira Knightley Reveals She Was a Real Tomboy Growing Up and Never Liked Ballet as a Kid.

"And the frustration of that she couldn't think of the words so she would just hit. And so I thought maybe if I did a dance for her then maybe she won't punch me in my nose today." After being sent to foster care, she had to part ways with her siblings. "At 12, 13 we got put in foster care got split up my two sisters were put together, my two brothers were put together and then I was by myself for a few days. Then I moved to a foster home, then a couple of other places then finally my grandma got custody of all of us." Richard Linklater Reveals Why He Was Disappointed With His 1993 Film Dazed and Confused.

Her road to success was not easy either. "It's a lot of men out here mad at me right now. It's a lot of dudes that used to tell me unless you f**k me you not gonna get here unless you're my girl. It's me that's gonna walk you through the door. And I'm like no it's God walking me in the door. You don't walk me in no door,' she said. "Had I done what I could've done to get where I'm at right now I probably wouldn't be here. I probably would be a full strung out drug addict because my integrity would be damaged," she added.

Haddish shared that "knowing the truth about how I got where I'm at it would hurt so bad like if I had got this kind of fame or success in my twenties, it would've been some shenanigans."

(The above story first appeared on LatestLY on May 07, 2020 02:46 PM IST. For more news and updates on politics, world, sports, entertainment and lifestyle, log on to our website latestly.com).