Tom Cruise’s Vintage Pictures Take the Internet by Storm on His 58th Birthday!

On the occasion of Tom Cruise’s birthday, tons of wishes and love have been pouring for the actor across social media platforms. But amidst these wishes, what you cannot miss are the vintage pictures of this Hollywood actor that has set the internet on fire. 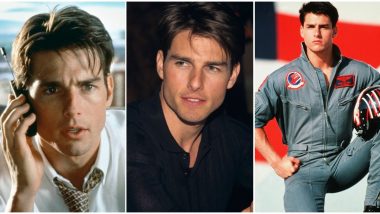 Tom Cruise, the man who has won hearts with his brilliant acting skills and charm, has turned 58 on July 3. Top Gun, Jerry Maguire, Mission: Impossible series, Jack Reacher, among others, are the iconic films to his credit. This Hollywood hunk is one of the highest-grossing box office stars of all time. It was at the age of 18 when he moved to New York City to pursue an acting career and made his first appearance in a minor role with the film Endless Love. He featured in many other classics after it, but, he cemented his status as a superstar with Top Gun. Tom Cruise Birthday Special: His Dapper Appearances Elevate His Debonair Personality (View Pics).

On the occasion of Tom Cruise’s birthday, tons of wishes and love have been pouring for the actor across social media platforms. But amidst these wishes, what you cannot miss are the vintage pictures of the actor that has set the internet on fire. Fans having been sharing some amazing stills of the actor from some of his iconic movies, and we bet, you won’t be able to get over those photographs. Time and again Tom Cruise has proved that age is just a number! Tom Cruise to Get Back in Action, Will Resume the Shooting of Mission Impossible 7 in September.

Abused by his father when he was kid.

Graduated as a functional illiterate because of Dylexia.

Has broken nearly every bone of his body to perform stunts.

Yet he has survived these all things.

Happy Birthday to the best Action hero of Hollywood.

Happy 58th birthday to the greatest action hero of all time.#TomCruise

The Young And Handsome

One of the greatest actor of all time.

Well, Tom is in my Top3 most favorite actor of all time. pic.twitter.com/kyv9n0UAcv

The Legend Of Hollywood

Happy 58th Birthday🎂 to the legend himself Tom Cruise.#HappyBirthdayTomCruise pic.twitter.com/cjjurmKWcd

To my favorite action hero❤️

We're All Hearts For Tom Cruise

Aren’t those photographs absolutely amazing? Be it his onscreen or off screen style, Tom Cruise’s looks has always grabbed fashion world’s attention. On the work front, Tom Cruise has two major films - Top Gun: Maverick and Mission: Impossible 7. We just cannot wait to see this Hollywood star on the big screen. Here’s wishing him a fabulous year ahead. Happy Birthday, Tom Cruise!

(The above story first appeared on LatestLY on Jul 03, 2020 01:52 PM IST. For more news and updates on politics, world, sports, entertainment and lifestyle, log on to our website latestly.com).