Tom Cruise to Get Back in Action, Will Resume the Shooting of Mission Impossible 7 in September

First assistant director on MI:7, Tommy Gormley in his conversation with BBC over the new safety protocols issued by British Film Commission elaborated on the unit's plans to resume their shooting in September. 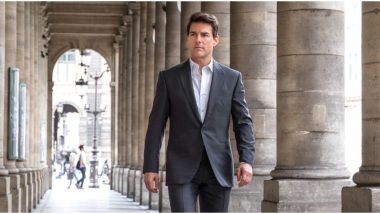 Tom Cruise is itching to get back in action and he's waiting for coronavirus restrictions to ease. The actor was supposed to start shooting for Mission Impossible 7 in Venice when coronavirus was declared as pandemic and the crew was forced to shut down their work and wait until further intimation. And with countries all over the world loosening their restrictions, it's safe to assume that Christopher McQuarrie will head back to his Italian locales to wrap up his project on time. Coronavirus Affects Hollywood: From Tom Hanks' Diagnosis to Delay In Mission Impossible 7, All That Has Been Hit By The COVID 19.

First assistant director on MI:7, Tommy Gormley in his conversation with BBC over the new safety protocols issued by British Film Commission elaborated on the unit's plans to resume their shooting in September. "We hope to start shooting again in September. We were days from shooting in Venice — we were right at the epicentre when it all kicked off — so we had to shut down in Venice where we were four or five days from shooting,” he said.

"We hope to visit all the countries we planned to and look to do a big chunk of it back in the UK on the backlot and in the studio, so September through to end April/May is our targets. We are convinced we can do this," he further added.

Earlier the director had teased about a surprise addition to the film's star cast while mentioning that it would be an exciting casting coup. Meanwhile, Nicholas Hoult has exited the production and Esai Morales has replaced him as the prime antagonist. The release date for Mission Impossible 7 also got pushed for obvious reasons and the film is now slated to hit the screens in November 2021.

(The above story first appeared on LatestLY on Jun 02, 2020 03:39 PM IST. For more news and updates on politics, world, sports, entertainment and lifestyle, log on to our website latestly.com).