Tom Hardy Replacing Daniel Craig as James Bond After No Time to Die? 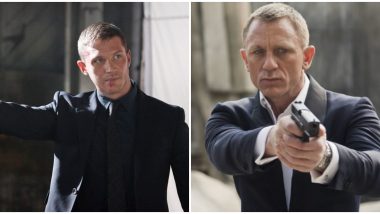 If things had gone right, and by that we mean the coronavirus pandemic was not here, we'd have the name of the new James Bond actor by now. Currently, the mantle is held by Daniel Craig, but he is retirng as Agent 007 after the upcoming film, No Time To Die. The movie was scheduled to release earlier this year, but it was delayed to November due to global lockdown. Thus, also delaying the news about the actor carrying forward the legacy of James Bond. We'd have to wait much longer for the announcement. Unless, a journalist was well-connected enough to get the intel in advance. As per the latest report by The Vulcan Reporter, Tom Hardy has been roped in for the role. No Time To Die New Poster Features Daniel Craig AKA James Bond Taking Aim at the Enemies.

There have been a couple of other reports that have stated that Tom Hardy's the new guy who'd like his martini shaken not stirred. But the new report claims that the casting is a done deal now and we'd get an announcement by early 2021. Although, once Hardy was asked about the rumours and he said, "There’s a saying amongst us in the fraternity of acting… that if you talk about it [Bond rumours] you’re automatically out of the race. So I can’t possibly comment on that one," Pierce Brosnan Would Love to Return to James Bond Franchise as a Villain, Reveals Quentin Tarantino Once Pitched a Bond Film to Him.

BTW, it is rumoured that Idris Elba, Benedict Cumberbatch, Tom Hiddleston, Rupert Friend, Cillian Murphy, Richard Madden have their names in the hat. In fact, a report claims that if No Time To Die performs exceptionally well, Craig might not retire at all.

Idris' casting will be pathbreaking. He has said, "Bond is one of the biggest franchises in the world, and for that reason, whoever ends up playing it, lives it,"

No Time To Die is the 25th James Bond film and the fifth featuring Craig. The movie is directed by  Cary Joji Fukunaga, who co-wrote It Chapter 1. Rami Malek plays the villain Safin. Lashana Lynch stars Nomi, a '00' agent. It is rumoured that she's the new Agent 007 after James Bond retires in the film, only to be pulled back for one last job.

(The above story first appeared on LatestLY on Sep 19, 2020 10:20 PM IST. For more news and updates on politics, world, sports, entertainment and lifestyle, log on to our website latestly.com).