Zendaya feels it is important not to be intimidated in Hollywood and doesn't want to be made to feel she is difficult just because she stands up for herself. The actress also said that it is about 'owning that power'. 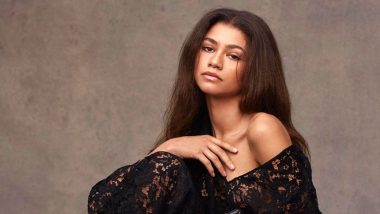 Actress Zendaya feels it is important not to be intimidated in Hollywood and doesn't want to be made to feel she is difficult just because she stands up for herself. "As a young woman in this industry, I think it's important not to be intimidated. I think that we're sometimes told to be a little bit afraid of our power. Emmys 2020: Zendaya Becomes Youngest-Ever Winner, Netizens Celebrate her Achievement (Check Out Tweets).

We're sometimes made out to be difficult or hard to work with, but we are just doing what everyone else is doing," Zendaya told OK! Magazine, reports femalefirst.co.uk. The actress added that it is about "owning that power". "It's about not being afraid to ask for the things that you know you are worth or are worthy of," she added. Zendaya Birthday: 7 Quotes By This Beauty That Will Leave You Inspired!

Zendaya added she felt stagnant after she gained super success through Disney shows such as Shake It Up and K.C. Undercover. "When I finished my Disney show, I had been working since I was 13. I had never not had a job, but then, all of a sudden, it stopped and I was like, ‘I don't know what I am going to do," she said.

"I felt very stagnant because I'd been doing the same thing for so long. But I knew I could do more and I knew there was a lot that people didn't know about me. Nothing really connected until I got Euphoria, which I landed the month before I was supposed to do Spider-Man," the actress recalled.

(The above story first appeared on LatestLY on Feb 28, 2021 10:14 AM IST. For more news and updates on politics, world, sports, entertainment and lifestyle, log on to our website latestly.com).