Even when she is making waves in Hollywood with her fashionable appearances, back home, Priyanka Chopra is hounded by controversies back to back. 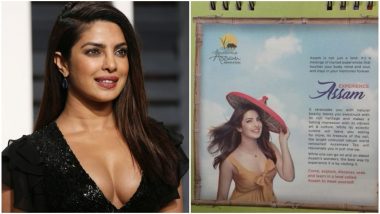 Even when she is making waves in Hollywood with her fashionable appearances, back home, Priyanka Chopra is hounded by controversies back to back. She earlier found herself dragged into the Nirav Modi scam, as she (and Sidharth Malhotra) was the brand ambassador of his jewellery. Now a new controversy comes knocking on her door, and this has something to do with the state she is endorsing - Assam.

The state had recently revealed a calendar shoot to promote the state that features the former Miss World and National Award winner. However, her attire - a frock - had created quite a stir with a couple of Congress MLAs demanding to take them down. Boko MLA Nandita Das had rejected the calendar raising objections over Priyanka's dress, it was deemed to be vulgar and immodest. MLA Rupjyoti Kurmi supported this, while also objected to choosing Priyanka as the brand ambassador over an Assamese actress.

Assam Tourism Development Corporation (ATDC), however, rejected their demands stating that the calendar doesn't promote any kind of obscenity and that Priyanka's presence helps getting the state international exposure. Speaking to a Guwahati-based weekly, the Chairman of ATDC, Jayanta Malla, said, “The calendar was made to promote Assam internationally. It has also been sent to prominent international tour operators and dignitaries. Priyanka Chopra is an international figure and her presentation in the calendar has not diminished Assam’s culture in any way."

(The above story first appeared on LatestLY on Feb 20, 2018 05:13 PM IST. For more news and updates on politics, world, sports, entertainment and lifestyle, log on to our website latestly.com).