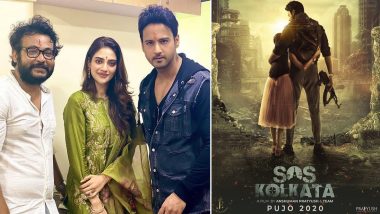 COVID-19 lockdown has left everyone in the state of uncertainity. Most of the professional outings saw a pause for a long time. Film industries were all shut due to the social distancing precautions. As many of the shoots are now however resuming, so did the shoot of Bengali film, SOS Kolkata. The Ayushman Pratyush directed movie is said to be the first film to go on floors post lockdown.

The flick starring Nusrat Jahan, Mimi Chakraborty and Yash went on floors on Wednesday in a city studio. Lead actress was quoted saying by TOI, "After months of no shooting, I finally entered the movie town studio this morning and it seems it is the beginning of a new era. All the familiar faces are clad in mask. I’m getting jitters. But I’m happy we are all back to the new normal. So many technicians have been out of work for so many days. I hope everything eventually turns out alright."

Speaking of how the cast and crew will function in this sensitive phase, Ayushman explained, "We have started working with 40 members of which 35 members will be on the floor. The first shot will be of Nusrat’s in a control room where hacking and surveillance take place. Yash will enter in the second half. He has a shot with Sudip Mukherjee." As the film line is getting adjusted to the new normal, it has to be seen how things turn out in the coming months.

(The above story first appeared on LatestLY on Jul 08, 2020 01:11 PM IST. For more news and updates on politics, world, sports, entertainment and lifestyle, log on to our website latestly.com).