Anandhi, known as Kayal in Tamil Cinema, has tied the knot with assistant director Socrates in Warangal. It was a low-key affair that took place on January 7, 2021. 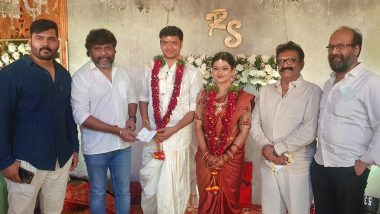 Anandhi, known as Kayal in Tamil Cinema, has tied the knot with assistant director Socrates in Warangal. It was a low-key affair that took place on January 7, 2021, in the presence of family members and close pals. The ceremony took place as per the Hindu rituals at the actress’ hometown. The picture from Anandhi’s wedding has been shared by producer and actor JSK Satish Kumar on social media. Along with a few pictures, he even shared a voice note in which he gave a bit information about the wedding and the bridegroom. Niharika Konidela and Chaitanya JV Tie the Knot in an Intimate Ceremony (View Pics and Videos).

As per the information shared by actor JSK Satish Kumar, Socrates is director Naveen’s brother-in-law. Socrates has worked as co-director in Agni Siragugal and Alaudhinin-Arputha Camera, and the earlier film was helmed by Naveen. Telugu Actor Raja Chembolu And Hima Bindu Tie The Knot! (View Wedding Pics).

On the work front, Anandhi had appeared in the film Kayal, which was Prabhu Solomon’s directorial venture and she had played the titular role. Since then Anandhi is popularly known as Kayal in Kollywood. Chandi Veeran, Trisha Illana Nayanthara are some of her other popular projects. There are several celebs who tied the knot during the pandemic and considering the situation they kept it a low-key event. Here’s wishing the newlyweds, Anandhi and Socrates, a happy married life!

(The above story first appeared on LatestLY on Jan 08, 2021 09:21 AM IST. For more news and updates on politics, world, sports, entertainment and lifestyle, log on to our website latestly.com).