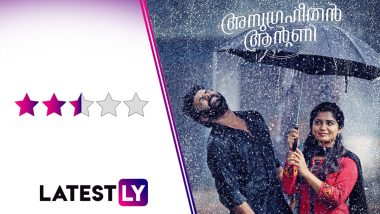 Anugraheethan Antony is a movie full of deceptive surprises. Right from the beginning, it aims to be a different experience for family audiences, delving into deeper themes without making it heavy to decipher. The movie is unusual for its genre, no doubt about it, but Anugraheethan Antony, despite a likeable cast and curiosity surrounding where the plot will take you, is bogged down by its haggard pacing, with plenty of slo-mo scenes, as if the director didn't have any writing to pad up the screentime.

So what's the plot about? Antony (Sunny Wayne) is the irresponsible, slacker son of Varghese (Siddique), who spends his time drinking with his friends and not taking up any work. His attitude changes when he sees Sanjana (Gauri Kishan)), the college-going daughter of a mill owner (Indrans). Under several pretexts, he keeps visiting her mill and following her, like any stalker hero in our cinema would do.

And like any heroine in those films, even Sanjana begins to develop feelings for him, though she has no clue about his whereabouts. To live up to her love, Antony decides to prim himself up one day, much the surprise of his father, but Fate has other plans for him.

There are several things that work in the favour of Anugraheethan Antony, and a few things that don't. The movie never fails to surprise us with the kind of direction it wants to take us. Right from the first scene, where a main character's mortal existence turns out to be not what you expected it to be. There is another scene where a widower is told by his friend that he needs to bring in someone to love and care. The widower lays back on his chair, giving a thought to the suggestion, and the next scene we have a woman open the door to his house. However, she turns out to be his niece, and the widower actually brings two canines to take care of.

Yet another sequence has two characters speak about a third one, and then the camera pans out a bit to reveal the third character being present in the same frame. I actually liked how the screenplay tried to play around with its subversions, though its plotline didn't really need additional surprises.

For Anugraheethan Antony packages a tale of existentialism in the guise of being a coming of age story and a romantic drama. It is about characters seeking closure in the gap between their demise and their ascension to their afterlives. It is a pretty lovely theme to say, and the movie keeps it light and entertaining when things really get going.

There are also some very clear influences that I need to point out here. The beginning of the movie feels inspired by the opening act of Konkona Sen Sharma's impressive directorial debut's A Death in the Gunj, though Anugraheethan Antony doesn't wait till the very end to reveal the twist, doing that in the opening scene itself. There are some shades of Kamal's Aayushkalam (that was inspired by Jerry Zucker's 1990 film Ghost), while conclusion to Antony's problem in the climax borrows from the climax of a very evergreen Salman Khan and Madhuri Dixit-starrer.

However, the main inspiration for the film could have come from David Lowery's 2017 subliminal, head-scratcher of a drama A Ghost Story, that also has a ghost observe the happenings of the people he once loved without them realising, and had dealt with themes of existentialism. Except of course, the director here doesn't drape the character in a white sheet, and doesn't have the heroine just eat a pie for five minutes straight!

The heart of Anugraheethan Antony comes from the love story of Antony and Sanjana, and while there are a few problematic beats, the chemistry between the actors doesn't repel you from the romance. The problem arrives in the second half when the film keeps dragging and dragging, and often gets distracted to subplots that don't really matter much. Like for example, the idea to use Antony's dog could have been inspired by a stray canine following Yudhisthira in Mahabharata during the Pandavas' last journey. But it doesn't make much sense in the movie. Yes, we know that dogs are loyal and would do anything for their masters, but Antony was quite a dick to them to begin with and his father is really their owner. Also moving the focus away from the main character frequently to the dog, who kind of matters only in the climax, only slow things down. So in between, the scenes of the dog drinking from a puddle or confronting a mobile phone stealer only exist to invoke the canine lover in us.

More annoying is how Anugraheethan Antony keeps stalling the pace to wrap things up in its third act. There are some good emotional scenes in the climax, but a little more dialling down the lack of pacing would have worked both in the film's eventual impact and on its runtime. Chathur Mukham Movie Review: Logical Flaws Aside, Manju Warrier’s Horror-Thriller Keeps You Hooked Throughout.

Speaking of the performances, Sunny Wayne delivers another likeable performance after Chathur Mukham earlier this year. The writing around Gauri Kishan's is weak, but her performance is decent. It is however, the veteran set of actors who gives the proceedings the emotional nuance it needs, be it Siddique (his wailing in the funeral scene is heartbreaking), Jaffer Idukki (easily becoming one of the most dependable performers), Indrans (subtle) and Muthumani (so graceful in the climax). Suraj Venjaramoodu scores in the brief runtime he has, also making a somewhat return to the facet of his performance that he was once known for - humour. Baiju is effective as the goon with whom Antony has a beef with.

Arun Muraleedharan's music is quite nice, with the "Kamini" being a standout.

- The Pacing and Needless Detours Are Letdowns

Anugraheethan Antony is blessed with an unusual storyline for a mainstream Malayalam film and a fine cast. Where it needed more blessing is in how it could have handled the pacing and its non-linear narrative. Releasing in theatres on April 1, 2021, Anugraheethan Antony is now streaming on Amazon Prime Video.

(The above story first appeared on LatestLY on Jul 21, 2021 05:06 PM IST. For more news and updates on politics, world, sports, entertainment and lifestyle, log on to our website latestly.com).