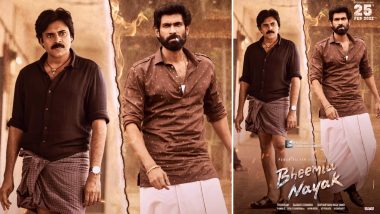 As the Telugu multi-starrer 'Bheemla Nayak' gears up for release on February 25, there's a buzz around that the film's post-theatrical streaming rights. If reports are to be believed, the digital rights of the Pawan Kalyan and Rana Daggubati-starrer 'Bheemla Nayak' have been sold to OTT giant Disney+ Hotstar for a record price. Bheemla Nayak Release Date: Pawan Kalyan and Rana Daggubati’s Film to Hit the Big Screens Either on February 25 or April 1! (Read Statement).

From non-theatrical rights such as dubbing, OTT, and satellite, 'Bheemla Nayak' is said to have made close to 70 crores. Though there isn't any official confirmation, it is expected that the makers will release a statement regarding the same in a couple of days.

Meanwhile, with the movie's release in the coming days, the makers are busy preparing a blasting theatrical trailer, which will be unveiled very soon. Helmed by Sagar K Chandra, 'Bheemla Nayak' is an original remake of Malayalam's super hit action drama titled 'Ayyappanum Koshiyum'. Bheemla Nayak: Pawan Kalyan And Rana Daggubati All Set To Have A Face-Off On February 25; Check Out The New Poster.

Pawan Kalyan and Rana Daggubati will reprise Biju Menon and Prithviraj Sukumaran from the Malayalam's original movie 'Ayyappanum Koshiyum'. Actresses Nithya Menen and Samyuktha Menon are the female leads opposite Pawan Kalyan and Rana Daggubati respectively. Trivikram Srinivas has penned the dialogues and the screenplay for the S Thaman's musical.

(The above story first appeared on LatestLY on Feb 18, 2022 04:01 PM IST. For more news and updates on politics, world, sports, entertainment and lifestyle, log on to our website latestly.com).