The Tamil film Dharala Prabhu, which released on March 13, is a remake of the Hindi movie, Vicky Donor. Dharala Prabhu, starring Harish Kalyan, Vivekh and Tanya Hope in the lead roles, has opened to positive reviews. 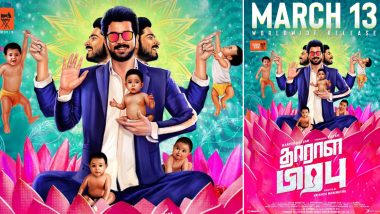 Harish Kalyan is extremely happy to see the overwhelming response for Dharala Prabhu. He tweeted, “Thanks to all the Press/social media influencers / online reviewers / movie buffs/ film enthusiasts/ radio/ tv channel/ website - FRIENDS & everyone who made it to the press show last night & gave us such a wonderful feedback. Overwhelmed with joy Red heartFolded hands #DharalaPrabhuFromMAR13”. Let’s take a look at the reviews shared by critics on Dharala Prabhu. CONFIRMED! Ayushmann Khurrana Starrer Vicky Donor to Be Remade in Tamil, Harish Kalyan to Play the Lead.

Sify.com – Director Krishna Marimuthu's Dharala Prabhu is a sensible adaptation of Hindi hit Vicky Donor. Krishna has made minor changes in the script to suit the sensibilities of Tamil audiences and also modified the lead characters and situations to make it convincing and relevant. Dharala Prabhu's biggest strength is comedy chemistry between Harish Kalyan and Vivekh. Harish has delivered a measured performance and showcases drastic improvement in the emotional scenes. Vivekh steals the show with his comic histrionics and one liners. Tanya Hope too looks promising in emotional scenes and has delivered an adequate performance.

Galatta – Harish Kalyan and Vivekh, who play the two lead characters, are fantastic. Harish Kalyan scores well and his light hearted, positivity-filled performance is impressive. Vivekh, on the other hand, is a wholesome delight. Director Krishna Marimuthu deserves a good applause for adapting Vicky Donor neatly and also for his sensibility in packaging the film.

#DharalaPrabhu enjoyable fun ride, a romcom, faithful remake of Vicky Donor. @Actor_Vivek is a scream and has a terrific on screen rapport with @iamharishkalyan who is riveting. Humour and emotions have been worked out well due to neat packaging & fine supporting cast.

Thumbs-Up For The Lead Actors

#DharalaPrabhu first half - a neat adaptation, finally a good film for @iamharishkalyan after #PyaarPremaKaadhal. Measured performance from the actor and @Actor_Vivek steals the show. Fantastic songs, sensible adaptation by Krishna Marimuthu. Good going so far 👍😊

#DharalaPrabhu - Tamil cinema gets its first cuddlesome film of the year. A Vicky Donor remake that makes just the right changes to appeal to our sensibilities. Entertaining and sensible. Backed by strong performances of @Actor_Vivek (in a solid comeback) & @iamharishkalyan 👌👌

A Must Watch Movie

All Praises For Harish Kalyan And Vivekh's Camaraderie

@iamharishkalyan #DharalaPrabhu interval : your another face of humour... Semma fun to watch the chemistry between Vivek sir and you

Ipdiye 2nd half irunthuchu na.. will be nice but very nice so far 👍🏼👍🏼 love is 😍

Besides Dharala Prabhu, there are few other Tamil films that have hit the theatres today. It includes Walter, Asuraguru and Kayiru. Let’s see how much Dharala Prabhu mints at the box office on the opening day. Stay tuned for further updates!

(The above story first appeared on LatestLY on Mar 13, 2020 01:46 PM IST. For more news and updates on politics, world, sports, entertainment and lifestyle, log on to our website latestly.com).