Etharkkum Thunindhavan aka ET is one of the most-anticipated films of Suriya. Ahead of its theatrical release, let’s take a look at some of the key details of the film. 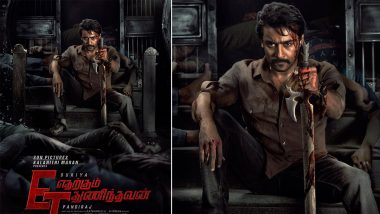 Fans have been eagerly waiting to watch Suriya on the big screen and that long wait will come to an end soon. Suriya’s last two films, Jai Bhim and Soorarai Pottru, had premiered directly on OTT platforms. Etharkkum Thunindhavan, produced under Sun Pictures’ banner, will be releasing in cinema halls and fans are thrilled about it. The action thriller features a stellar cast and we got to catch a glimpse of it in the film’s trailer. Etharkkum Thunindhavan Trailer: Fans Declare Suriya’s Upcoming Film A Blockbuster On Twitter Already!

Etharkkum Thunindhavan aka ET is one of the most-anticipated films of Suriya. Ahead of its theatrical release, let’s take a look at some of the key details of the film.

Cast – ET is written and directed by Pandiraj. The film stars Suriya and Priyanka Arul Mohan in the lead. The film also features Vinay Rai, Sathyaraj, Rajkiran among others in key roles.

Plot – The film will see Suriya’s character fighting the crimes done against women. It showcases how society treats women and also the atrocities done against them.

Watch The Trailer Of Etharkkum Thunindhavan Below:

Release Date – ET is all set to be released in theatres on March 10. The Tamil film will be released along with dubbed versions in Hindi, Telugu, Malayalam and Kannada languages.

Reviews – The reviews for Etharkkum Thunindhavan or ET are not out yet. As soon as the film’s reviews are out, LatestLY will update you all with the same.

(The above story first appeared on LatestLY on Mar 08, 2022 02:29 PM IST. For more news and updates on politics, world, sports, entertainment and lifestyle, log on to our website latestly.com).