The shooting of Hey Sinamika had commenced in March 2020 and the makers had reportedly planned to complete the shoot in a single schedule. 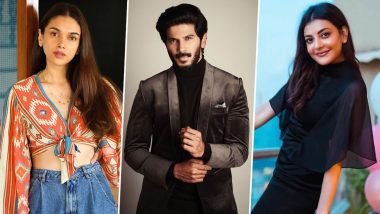 Hey Sinamika marks the directorial debut of choreographer Brinda Gopal. Jio Studios would also be venturing into Kollywood with this upcoming flick. The makers have shared that the shooting of the Tamil film has been wrapped up and even shared a few pictures from the sets of the film. The pictures not only features the entire cast and crew, but it also highlights stills of the lead actors along with the choreographer-turned-director. Hey Sinamika: Kajal Aggarwal, Dulquer Salmaan and Aditi Rao Hydari's Film Gets a Title; Marks Choreographer Brinda’s Directorial Debut.

The shooting of Hey Sinamika had commenced in March 2020 and the makers had reportedly planned to complete the shoot in a single schedule. But since lockdown was imposed in the wake of coronavirus outbreak, shooting of several films had to be stalled considering the safety of the cast and crew. Then after months, the makers were permitted to resume the shooting of films by adhering to the safety guidelines issued by the government. The shooting of Hey Sinamika had resumed after a gap of almost seven months. Confirmed! Kajal Aggarwal and Dulquer Salmaan to Share Screen Space in a Tamil Film (Watch Video).

Shooting Of Hey Sinamika Wrapped Up

The shooting of Hey Sinamika was completed on December 26. The film’s music has been composed by Govind Vasantha, whereas Preetha Jayaraman will be handling the cinematography. The film is slated to be released in 2021. Stay tuned for further updates!

(The above story first appeared on LatestLY on Dec 28, 2020 11:20 AM IST. For more news and updates on politics, world, sports, entertainment and lifestyle, log on to our website latestly.com).