This upcoming project will star Kajal Aggarwal, Dulquer Salmaan and Aditi Rao Hydari in the lead role. Hey Sinamika will be helmed by one of the most popular choreographers down south, Brinda, marking her directorial debut. 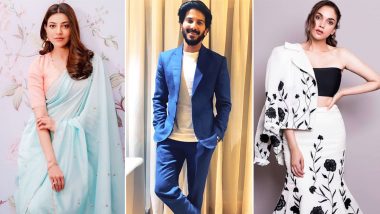 The long, long wait to know details about Dulquer Salmaan and Kajal Aggarwal's Tamil film has come to an end. It was in January this year, a video of Kajal Aggarwal (while interacting with the media) went viral in which she confirmed that she’d be teaming up with Mollywood hunk. Since then fans have been waiting for some great updates on this project as it would be the first time ever that Kajal and Dulquer would be featuring together in a movie. Here is the major update on this movie! The makers have not only confirmed about the star cast, but have also announced about the film's title, which is Hey Sinamika. Confirmed! Kajal Aggarwal and Dulquer Salmaan to Share Screen Space in a Tamil Film (Watch Video).

This upcoming project will star Kajal Aggarwal, Dulquer Salmaan and Aditi Rao Hydari in the lead role. Hey Sinamika will be helmed by one of the most popular choreographers down south, Brinda. She has worked with some of the leading actors not only from South Cinema, but also with Bollywood stars as well. Brinda would be making her directorial debut with this Dulquer Salmaan Aditi Rao and Kajal Aggarwal starrer. As per industry expert Ramesh Bala, the shooting of the film will commence from today in Chennai. It is also said that the shooting of this film will be wrapped up in a single schedule. Kannum Kannum Kollaiyadithaal Movie Review: It’s A Thumbs Up from Twitterati for Dulquer Salmaan and Ritu Varma’s Tamil Film!

The shooting is expected to be completed in a single schedule..

Veteran actress Khushbu, who is a very good friend of choreographer Brinda, wished her good luck for this new beginning. She tweeted, “My soulmate,I have known you the longest!! 33yrs..have seen you struggle,fight back n grow as the best in your field. As you embark on a new journey tmrw I wish you the best of it..I know you will excel in your new avatar.I am so proud of you baby @BrindhaGopal1”. The music of Hey Sinamika is composed by Govind Vasantha and the film bankrolled by Jio Studios.

(The above story first appeared on LatestLY on Mar 12, 2020 12:44 PM IST. For more news and updates on politics, world, sports, entertainment and lifestyle, log on to our website latestly.com).