Hyderabad’s Most Desirable Woman of 2018: Not Samantha Akkineni or Rashmika Mandanna, but Aditi Rao Hydari Tops the List!

Aditi Rao Hydari made her debut in Telugu cinemas with the film Sammohanam, written and directed by Mohanakrishna Indraganti. 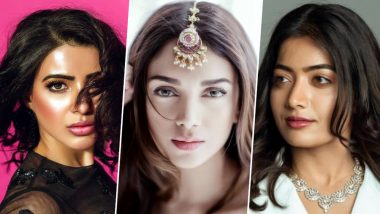 Aditi Rao Hydari is known for her works in Hindi cinema, but do you know she had made her acting debut with the Malayalam film Prajapathi which released in 2006? The film starred superstar Mammootty in the lead with Nedumudi Venu in the supporting role. Aditi made her debut in Telugu cinema with the film Sammohanam and her performance in it left the cinephiles impressed. Samantha Akkineni, Rashmika Mandanna, Pooja Hegde, are some of the actresses who are ruling down south but looks like Aditi has won race the in the most desirable woman list of 2018. As per reports, Aditi Rao Hyddari has topped the list in Hyderabad Times Most Desirable Woman 2018. Fans Can’t Stop Gushing Over Samantha Akkineni and Naga Chaitanya’s Latest Insta Post! See Pic.

There were 25 contenders for Hyderabad Times Most Desirable Woman 2018 and Aditi Rao Hydari has left behind many other actresses and personalities from other fields and topped the list. As per a report in TOI, the celebs who were a part of the list includes Sai Pallavi, Anushka Shetty, Kajal Aggarwal, Keerthy Suresh, Tamannah Bhatia, Saina Nehwal, PV Sindhu and more. Dear Comrade Teaser: Vijay Deverakonda-Rashmika Mandanna’s Sizzling Chemistry, Sid Sriram’s Love Song in the Background, Leave Fans Impressed! Watch Video.

Take a look at some of Aditi Rao Hydari’s pictures below:

Create your own sunshine

So so flattered! What an amazing compliment to wake up to! Thank you so so much @hyderabad_times and all you amazing amazing people who've voted for me. This is my first year in the Telugu industry and you guys just made it all the more special ❤❤

My first time, Closing fashion week, and that too in my mother’s handloom sari... ♥ The Finale show of the #LotusMakeupIndiaFashionWeek in delhi with 21 designers celebrating the timeless saree... #SixYardsOfLove #Heritage #Handloom #MadeInIndia #LMIFW

In an interview to Hyderabad Times when the 32-year-old star was asked what she thinks makes her the most desirable, Aditi Rao Hydari was quoted saying, “Honestly, I prefer not knowing what makes me desirable. I don’t ever want to be self-conscious; I always want to be effortless.” She also mentioned, “I hope I am desirable to people for who I am as a person – for my positivity, my work and my talent. I think that desirability is timeless!”

Aditi Rao Hydari took everyone by surprise with her performance in films like Rockstar, Wazir, Fitoor, Kaatru Veliyidai and many others. The actress will next be seen in the Tamil psychological action thriller, Psycho, directed by Mysskin. Stay tuned for further updates.

(The above story first appeared on LatestLY on Mar 20, 2019 11:50 AM IST. For more news and updates on politics, world, sports, entertainment and lifestyle, log on to our website latestly.com).