Koozhangal produced by Nayanthara and Vignesh Shivan under the banner of Rowdy Pictures, has won the prestigious Tiger Award at IFFR. 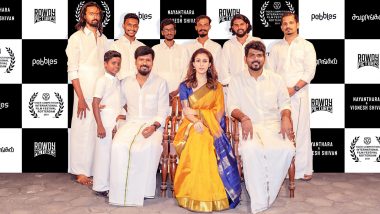 Koozhangal, known as Pebbles in English, directed by debutant Vinothraj PS, produced by Nayanthara and Vignesh Shivan under the banner of Rowdy Pictures, has won the prestigious Tiger Award for best film at the 2021 International Film Festival Rotterdam (IFFR). Koozhangal was premiered at the Rotterdam festival on February 4. Vignesh, who is extremely elated about this big win, shared a tweet that read, “First Production of @Rowdy_Pictures wins one of the most prestigious international award!  First Tamil film to win this award 2021 #TigerAward winner #Koozhangal #Pebbles Can’t be happier!” Nayanthara’s Next Film Netrikann to Be Bankrolled by Beau Vignesh Shivan.

Koozhangal, starring newcomers Karuththadaiyan and Chella Pandi, is the second production of Nayanthara and Vignesh Shivan after Netrikann under their home banner Rowdy Pictures. The film’s music has been scored by Yuvan Shankar Raja. Talking about Koozhangal the Rotterdam jury said in a statement, “The jury was blown away by a seemingly simple and humble film we fell in love with instantly.” The jury members comprised of Lemohang Jeremiah Mosese, Orwa Nyrabia, Hala Elkoussy, Helena van der Meulen and Ilse Hughan, reports Screen Daily.

First Production of @Rowdy_Pictures wins one of the most prestigious international award !

Vignesh Shivan said in a statement, “There are certain days that become precious and valuable when we come across a film that makes us proud of the field we are associated with. One such moment was watching this beautiful movie Koozhangal, which marks the directorial debut of PS Vinoth Raj. The film’s premise is as simple as the title but created an exquisitely loveable impact within.” Heartiest congratulations to team Koozhangal for this top honour at IFFR 2021!

(The above story first appeared on LatestLY on Feb 08, 2021 10:19 AM IST. For more news and updates on politics, world, sports, entertainment and lifestyle, log on to our website latestly.com).