Ilaiyaraaja Birthday: 5 Songs Composed By The Music Maestro Of Indian Cinema That You Need To Listen To Right Now! 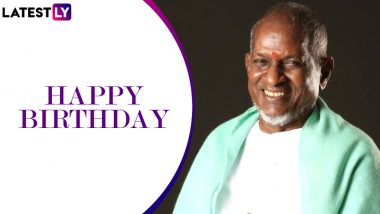 Ilaiyaraaja is regarded as one of the greatest Indian music composers, who has composed more than 7,000 songs. The music maestro of Indian Cinema celebrates his 77th birthday today and fans can only reminisce some of the classics that he has given us in these many years. For the unversed, this legendary music composer, songwriter, singer is credited for introducing western musical sensibilities in the Indian film musical mainstream. Ilaiyaraaja is a recipient of five Indian National Film Awards. In 2010, he was awarded the Padma Bhushan and in 2018, he was awarded the Padma Vibhushan. Ilaiyaraaja, one of the most precious gems in the world of music, was also honoured with the Sangeet Natak Akademi Award in 2012. Maestro Ilaiyaraaja to Perform With KJ Yesudas and Balasubrahmanyam in a Special Concert!

Ilaiyaraaja’s music has a very different kind of magic. Be it to define any relationships or for any other given scenario, his songs have had a great impact on the audience. The veteran music composer has a deep understanding of so many different styles of music, uses a range of complex compositional technique, and one just falls in love with the various melodies composed by him. Be it Tamil, Malayalam, Hindi, Telugu, Kannada or English, he has composed songs for films in all these languages. On the occasion of his birthday, let’s take a look at some of his classic numbers.

This is a very beautiful number from the Hindi film Sadma that featured Kamal Haasan and late actress Sridevi in the lead roles. This track was sung by Suresh Wadkar and it went on to become the cult song in Hindi.

Veteran singer S Janaki had lend her voice for this popular Malayalam song “Thumbi Vaa Thumbakudathin” from the film Olangal. It had gained massive popularity on release.

The song “Rakkamma Kaiya Thattu” from the Tamil film Thalapathi was sung by SP Balasubrahmanyam and Swarnalatha. Picturised on Rajinikanth and Sonu Walia, this was one of the biggest hits of 1991. In 2003, this track was named the fourth most popular song in a poll conducted by the BBC World Service worldwide.

This was again from the 1983 film Sadma. It is another emotional yet a beautiful track crooned by KJ Yesudas. It was magical as the original Tamil song, “Kanne Kalaimane”.

The song “Unarumee Gaanam” was sung by G Venugopal for which he had also won the Kerala State Film Award for Best Singer. A soothing song, beautifully composed by the legend, Ilaiyaraaja.

These are the iconic number composed by Isaignani, as he is fondly called by all his fans. Here’s wishing music maestro Ilaiyaraaja a very happy birthday and a fabulous year ahead.

(The above story first appeared on LatestLY on Jun 02, 2020 12:15 AM IST. For more news and updates on politics, world, sports, entertainment and lifestyle, log on to our website latestly.com).