Lijo Jose Pellissery is known for his works in the Malayalam film industry. This filmmaker, who is known for his unconventional approach in directing, took to Facebook and announced about his next project. 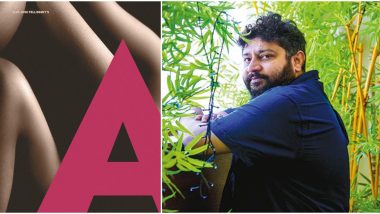 Lijo Jose Pellissery is known for his works in the Malayalam film industry. Nayakan, City of God, Amen, Double Barrel, Angamaly Diaries, Ee.Ma.Yau and Jallikkattu are the films directed by him. This filmmaker, who is known for his unconventional approach in directing, took to Facebook and announced about his next project. And this announcement is coming right after he had put up a status in Malayalam language that read, ‘Njan oru cinema pidikkan pokuvada, aaraada thadayan?’ which means ‘I am going to make a film, who is going to stop me?’ See You Soon: Fahadh Faasil’s Film with Mahesh Narayanan to Be Shot on iPhone?

With that status shared by Lijo Jose Pellissery, many assumed that Aaraada Thadayan would be the title of his next film. But the filmmaker rubbished all the speculations and shared a poster that had written A over it. While sharing the post, he only mentioned that the shooting of this project would start from July 1. There is no other information regarding its cast or any other key details. Kerala Film Producers to Cut Production Costs in Half to Help Malayalam Cinema Tide Over Its Worst Crisis Ever.

The Kerala Film Producers Association had stated that no new films must be shot as there are almost 66 Malayalam films pending to be released. However, the Kerala government had earlier granted permission to resume the shooting of films and television serials by adhering to the guidelines issued.

(The above story first appeared on LatestLY on Jun 24, 2020 02:10 PM IST. For more news and updates on politics, world, sports, entertainment and lifestyle, log on to our website latestly.com).