The teaser hints that the film is releasing during Summer 2019. 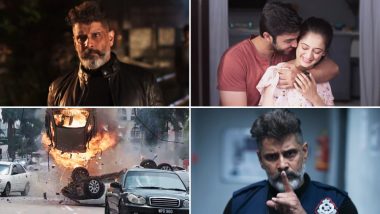 Two National award winners join hands for Kadaram Kondan, a stylish thriller. Kamal Haasan and Chiyaan Vikram collaborate for this venture, that is directed by Thoongavanam fame Rajesh M Selva. While Kamal Haasan is happy being involved in a producer's capacity, Chiyaan Vikram plays the lead. The first poster that came out a couple of months stunned us with a very stunning look of the perennially handsome Vikram. Kadaram Kondan First Look: Kamal Haasan Presents a Smoking Hot Poster of Chiyaan Vikram. Literally!

Now we have the first teaser of the film that looks to have the trappings of a heist thriller made on the lines of Dhoom series. There are bike chases, shootouts, stylish action sequences. By the looks of it, Vikram is playing a cop. While Vikram dominates the proceedings, naturally, we also see glimpses of the supporting cast, including Akshara Haasan, Abhi Hassan and Malayalam actress Lena. However, the makers have made sure to avoid spoilers about the premise. Akshara Haasan's Leaked Pics Row: Tanuj Virwani Says He Does Not Have The Mobile Phone That Had Actress' Private Photos.

The teaser hints that the film is releasing during Summer 2019. There have been reports that Kadaram Kondan is a remake of the Hollywood thriller Don't Breathe, but the teaser gives a completely different idea about the story. From what it looks like, we have a feeling it resembles Denzel Washington's Training Day. What say, readers?

(The above story first appeared on LatestLY on Jan 15, 2019 12:25 PM IST. For more news and updates on politics, world, sports, entertainment and lifestyle, log on to our website latestly.com).