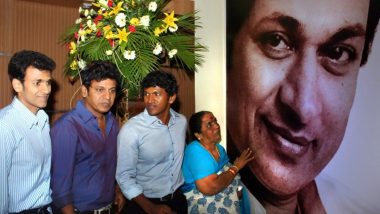 Tech giant Google has courted a fresh controversy over wrongly inserting late Kannada thespian Dr Rajkumar's photograph for a character named 'Half Boil' in Vijay Sethupathi Tamil starrer Vikram Vedha. Earlier, the tech giant was forced to tender a public apology on June 4, after its search engine produced results on Kannada as one of the ugliest languages in the world. Raashii Khanna Is in Awe of Anushka Shetty and Samantha Akkineni, Says ‘These Women Are Changing the Way People Are Looking at Actresses Down South’.

Many Kannada film stars and several fans took serious objection to the goof up by Google as Rajkumar, who died in 2016, is considered to be a Kannada cultural icon and is still remembered by millions of fans. Highlighting this anomaly, Kannada Film Director, Actor and Writer Rishab Shetty took to his Twitter account and appealed to his followers on the microblogging site to report the error. From Alia Bhatt’s RRR, Saif Ali Khan’s Adipurush to Ananya Panday’s Liger; Top Names of North and South Co-Star in Mega Projects.

"I have a request for everyone. "Vikram Vedha" film's Google search shows our Dr Rajkumar's photo in place of another actor. Please report it and correct the mistake," he wrote on his Twitter page on Monday evening. Even after his tweet, Google has not changed the photo yet. Rajkumar earned his demigod as well as Kannada cultural icon status for his performances in several genres -- romantic, action, drama, thriller and mythological. Almost all the movies were superhits and won several awards for his performance. He was the only lead actor to win a National Award for singing. He breathed his last on April 12, 2006.

(The above story first appeared on LatestLY on Jun 23, 2021 05:51 PM IST. For more news and updates on politics, world, sports, entertainment and lifestyle, log on to our website latestly.com).