Liger: Vijay Deverakonda-Ananya Panday’s Film Is All Set To Hit Theatres on September 9, 2021 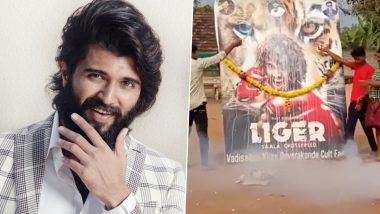 The Vijay Deverakonda and Ananya Panday-starrer Liger has been confirmed for a theatrical release on September 9 this year. Vijay shared a poster of the Puri Jagannadh directorial on Thursday while announcing the release date. "The Date is set. India - we are coming! September 9 2021," he wrote as  the caption. LIGER: Karan Johar Shares Vijay Deverakonda's First Look as a Fierce Boxer in Puri Jagannadh Film.

He hashtagged his post with #LIGER, #SaalaCrossbreed and #PuriJagannadh, and also tagged co-stars Ananya Panday and Charmme Kaur, and producer Karan Johar among others. Johar, who bankrolls the film, shared the same poster, where Vijay is seen dressed in a black vest and grey joggers. He holds a rod and sports an intense look. Ek Villain Returns: John Abraham, Arjun Kapoor Film is All Set to Hit Theatres on February 11, 2022.

The filmmaker wrote the caption: "All set to pack a punch around the globe! #Liger is releasing in theatres on 9th September worldwide in 5 languages - Hindi, Telugu, Tamil, Kannada and Malayalam. #Liger9thSept #SaalaCrossbreed." Ananya shared the poster and wrote the same caption as Johar.

(The above story first appeared on LatestLY on Feb 11, 2021 02:32 PM IST. For more news and updates on politics, world, sports, entertainment and lifestyle, log on to our website latestly.com).