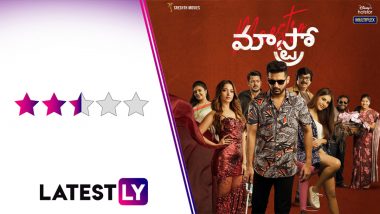 Maestro Movie Review: For those who don't know this, or hasn't even bothered to see the trailer of Maestro, it is the official remake of the Hindi thriller, AndhaDhun. The original came out in 2018, and was directed by Sriram Raghavan, featuring a National Award-winning performance by Ayushmann Khurrana and Tabu in quite a Black Widow form. The Telugu remake is directed by , and has Nithiin, Tamannaah and Nabha Natesh in the lead. Maestro: Nithiin and Tamannaah Bhatia’s Thriller to Premiere on Disney+ Hotstar on September 17!

If you haven't seen AndhaDhun (why haven't you?), let me brief you on the plot of Maestro. Or rather let me gloss through it, so as to avoid plot spoilers. So there is Arun (Nithiin), who the world sees as this blind but supremely talented pianist. Sophie (Nabha Natesh), the owner of the cafe where Arun practices his piano, falls for him. Mohan (VK Naresh), a yesteryear hero, enjoys his music and asks Arun to come to his apartment to play piano as an anniversary gift for his young wife Simran (Tamannaah).

Arun arrives there, only to stumble upon a dark secret of the woman, but he cannot do anything about that without compromising on his own secret.

Now reviewing Maestro is quite a dicey affair for me. As someone who has been analysing films for a career, I have had to review remakes of films that are already very popular or those I have seen or loved. In fact, reviewing those remakes is usually an easier task for me, as they come pre-assigned with easily-gaugable yardstick. Most of them are terrible, hence it is easier to call out the inferiorities, and only rarely do a remake arrives that fares better than the original.

Maestro, however, falls in the rare category of a film whose reviewing is kind of an irritating task. I mean, how can you make an opinion of a film that is almost a frame-to-frame remake? Forget the narrative, from the colour palette to the locales to even twist-making blind hare, nearly every aspect of AndhaDhun is borrowed here, save for the cast and the crew.

The performances also don't offer much to complain, from Nithiin (extremely charming) to Tamannaah (sultrily dangerous enough) to even Jisshu Sengupta (the lover, adds a nice comic touch) and VK Naresh (effective in his brief screentime) doing enough justice to their roles. But even with their best foot forward, it is difficult to not draw comparisons when they fill in some big shoes. Especially for the leads, where one of the shoes earned the original actor a National Award, and the other shoe belongs to one of the finest actresses this country has ever seen. Maestro Promotional Song Shuru Karo: Nithiin, Tamannaah Bhatia and Nabha Natesh’s Track Is Catchy and Groovy.

So how best to judge Maestro as a movie? Having the fortunate opportunity to have seen AndhaDhun, I had nothing but a two-and-quarter hours of going through a well-made but still vacuous remake. Look, no matter how closely someone replicates the painting of Mona Lisa, a replica will always be replica. And that's exactly the thought that kept ringing in my mind while watching Maestro.

Save for a little extension in the last scene (that kinda ruins the terrific cliffhanger ending of the original), Maestro is nearly the same film, except it is in Telugu (strange that every character that Arun meets in Goa speaking his language). It's like a student who has copied all the answers of the classmate in front of him or her, but we know who is the smarter student.

And to think, there is already a Tamil and a Malayalam remake of AndhaDhun in the works. I should really start looking for someone to review those films, who hasn't been awed by Sriram Raghavan's movie. But then such a person would never be in this field!

- Actors Deliver the Goods As Their Roles Demand

- Offers Nothing New for Those Who Have Watched the Original

Maestro would most likely impress those who haven't got the chance to watch AndhaDhun. For the rest, it is like watching a very glossy facsimile that offers no new surprises, though Nithiin is excellent in the lead role. Maestro is streaming on Disney+ Hotstar.

(The above story first appeared on LatestLY on Sep 17, 2021 10:01 AM IST. For more news and updates on politics, world, sports, entertainment and lifestyle, log on to our website latestly.com).