Maharshi is a serious drag of a movie that suffers from predictable plotting and insufferable editing. 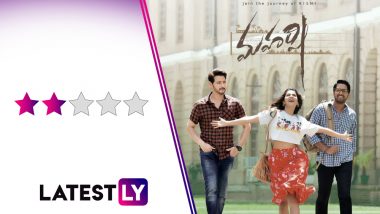 Good Intentions and Social Messages don't always make for a good movie. Also, it is high time some of the film-makers need to contain themselves when it comes to making movies with superstars in the lead. Having said that, let's talk about Mahesh Babu's latest release, Maharshi. Directed by Vamsi Paidipally of Oopiri and Yevadu fame, Maharshi was highly anticipated, as it follows the blockbuster success of Mahesh Babu's last film, Bharat Ane Nenu. If you know the template of such superstar vehicles, you will have a pretty good idea of what Maharshi has to tell you. The problem is how long it takes to get the damn point! Maharshi Leaked Online: Story of Mahesh Babu’s 25th Film Hits the Internet Ahead of Release (SPOILER ALERT).

Rishi Kumar (Mahesh Babu) has been recently appointed as the CEO of the world's biggest corporate company, Origin. He is someone who runs after success like an obsession, even at the cost of his personal life. A surprise reunion with his old friends from his college and hometown takes Rishi down the memory lane.

We learn that even as a child, Rishi was obsessed with gaining money and power, after seeing his 'meek' father (Prakash Raj) getting humiliated by loan sharks. He turns out to be a brilliant, driven young man determined to scale great heights. We also get a peek into his college life and his new friends Ravi (Allari Naresh) and Pooja (Pooja Hegde), and how his fixation with success drives them away. And it is one of them that makes Rishi return to his country when he learns of the person's sacrifice for his success.

Maharshi has nearly every ingredient you expect from a superstar vehicle - a hero who is infallible and presented in most favourable light possible. A second hero who suffers from the brunt of everything. A female lead who's sole purpose is to be an eye-candy. Villains with no particular nuance. A mandatory, prevalent social cause to make the hero endear himself to the masses. Slo-mo, uninspired fight scenes and randomly inserted, but stylishly shot song sequences. And finally, an editor who totally sucks at controlling the runtime.

While the ingredients are delectable for an average viewer, it is the final mix that turns out to be so unpalatable in most of the portions. You really have to blame the predictable tale, and insipid writing for letting down both Mahesh Babu, in his elements here, and the film. Not to forget, completely unoriginal too!

Not just that Maharshi has shades of Mahesh Babu's earlier works like Srimanthudu and even Bharat Ane Nenu, it also riffs off a couple of popular Bollywood films. The first half, especially the college portions, feels like a self-obsessed take on 3 Idiots and New York. The second half goes on a completely different tangent and becomes a mass-driven version of Swades. Only so less effective.

Not that these portions don't have its moments. The bonhomie between Rishi, Ravi and Pooja, has some rib-tickling moments. And so is the scene where Rishi gets to meet Pooja's extended family. The second half, despite having the real plot, drags even further but the scene where Rishi finds out what a lone old farmer has been doing all the while is brilliant. Maharshi needed more such scenes, instead of obsessing in making its hero look good, no matter what the situation is. Ahead of Maharshi Release, Mahesh Babu and Namrata Shirodkar Holiday in Paris With Kids (See Pics).

I have to give credit to Vamsi for trying to address the prevalent issue of farm-land acquisitions by corporates and farmer suicides. But Maharshi is hardly imaginative in coming out with a real solution, or for the matter, tell us something different that we don't already know.

Watch the Trailer of Maharshi here:

It is also somewhat annoying how the film deals with characters that aren't Rishi. Ravi is perhaps the best-depicted character in the film after Rishi and it is his struggle in the movie that has a better connect with us. Yet, the makers chose to sideline him and get the focus back on their handsome lead star. Similarly, Pooja might have been a brilliant girl, considering she gets admission in the same prestigious college as Rishi, But once she falls for Rishi, her entire life and ambitions are made about him. In one scene, when Pooja reveals her plans to Rishi about getting married to him and have his kids, I so wanted him to shake her up and give her a reality check about herself. Luckily, Rishi does the first part well, but again, makes everything about himself!

The role of Rishi is something that a superstar of Mahesh Babu's calibre can pull off even in his bad days. There is hardly anything challenging for the actor, as the director relies more on his superstar persona to save the movie. It is high time that film-makers put some real challenging odds for our South superstars that make them exert a little more, both in their character, as well as, in their performance. The only struggle I saw Mahesh Babu's character go through in the movie was in the dance sequences.

Allari Naresh brings some emotional gravitas in his performance as the good-hearted Ravi. Pooja Hegde simply gets little scope, especially in the later portions of the film, and is mostly restricted to being nothing more than a love interest. Jagapathy Babu as the main antagonist is his usual self.

- Too Much of a Drag

Maharshi addresses a couple of relevant and has its heart in its right place, But it is also made keeping Mahesh Babu's superstar persona in mind, and that takes away the impact of what the film wants to say. Despite a couple of good moments, Maharshi is a serious drag of a movie that suffers from predictable plotting and insufferable editing.

(The above story first appeared on LatestLY on May 09, 2019 01:36 PM IST. For more news and updates on politics, world, sports, entertainment and lifestyle, log on to our website latestly.com).