He is the perfect son, perfect actor, perfect husband, perfect father and a perfect human. Happy Birthday Mahesh Babu. On the occasion of his 44th birthday, LatestLY compiles a few interesting facts about te most handsome actor that the South Indian Film Industry can boast of. 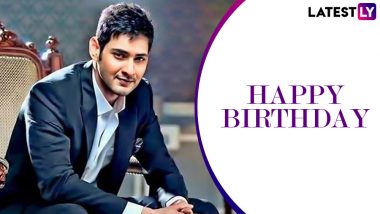 He beat Khans and Kapoors of Bollywood to be ranked as the Most Desirable Man, which is no mean feat we’d say. His smile is to die for, his charm is to live for. Touted one of the most handsome actors that India has, he is also called the Greek God of Tollywood and by now, you must have already guessed who we are talking about- Mahesh Babu. Born on August 9, 1975, the actor turns 44 years old and no, not even in one of his pictures does Mahesh look his age. Ahead of Mahesh Babu's 44th Birthday, Fans Trend #HappyBirthdaySSMB by Sharing South Superstars Photos & Lovely B-Day Messages on Twitter!

Mahesh is known to be media-shy and reserved, but otherwise a very humble personality, which is rare to find in actors of his calibre. Though he does not bare much of his body in his films, his lean and mean figure is enough for his female fandom to drool over, ooh did we mention his voice too?

Enough of us drooling over the actor. On the occasion of his birthday, here are some interesting facts that you would want to know about Mahesh Babu:

Mahesh Babu might rule the hearts of the Telugu industry, but he does not know how to read the language. He can (obviously) speak and understand the language and delivers all those powerful dialogues with the help of his directors who read out the lines to him.

After his debut with Needa in 1979 when he was only 4 years old, Mahesh went on to star in films like Poratam, Mugguru Kodukulu, Shankharavam, Bala Chandrudu and Anna Thammadu among other as a child artist.

Thank you for always inspiring me to be the best version of myself !! pic.twitter.com/qAwZ64uSpu

Mahesh is fluent in Tamil as he completed his education in Chennai, after taking a 9-year break from films, as instructed by his father, superstar Krishna.

In his career spanning 30 years, Mahesh has a total of eight Nandi Awards and five Filmfare South awards.

Apart from being one of the most good looking men in the country, Mahesh Babu also has a heart of gold. Borrowing a page from his character from Srimanthudu, Mahesh Babu has adopted his father’s village Burripalem in Tenali.

Not only that, it has been reported that 30% of the actor’s annual earnings are donated for good causes. He is a philanthropist too, which only makes him more desirable, doesn’t it?

Apparently, Mahesh’ fan following is not limited only to South India. It has been stated that his movies that are dubbed in Hindi have the highest TRP ratings.

Also, Mahesh ranks as one of the very few actors to have a national brand endorsement deal. He has replaced Akshay Kumar as the face for Thums Up.

Mahesh Babu is said to be the second-highest-paid actors in South India after none other than Thalaivar Rajnikanth.

Apart from being a totally devoted family man, Mahesh Babu also abstains from smoking and drinking (even though he did endorse Royal Stag).

Well, we could go on and on about Mahesh Babu and interesting facts of his life… such are his life achievements. Nevertheless, here’s wishing the actor, who only ages like fine wine… a very Happy Birthday!!

(The above story first appeared on LatestLY on Aug 09, 2019 08:00 AM IST. For more news and updates on politics, world, sports, entertainment and lifestyle, log on to our website latestly.com).