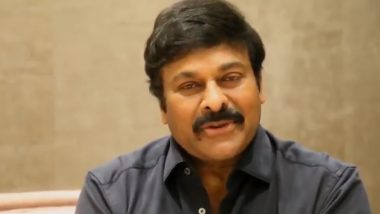 Chiranjeevi is one of the most loved actors of Indian Cinema. He has fans across the country who eagerly look forward to his intriguing projects. The megastar was last seen in Sye Raa Narasimha Reddy, directed by Surender Reddy. The movie that featured an ensemble cast, was a huge hit at the box office. The veteran actor’s upcoming project is Koratala Siva’s mega budget film, Acharya. According to leading media reports, the makers of Acharya are planning to release the film’s first look poster on the occasion of Megastar Chiranjeevi’s 65th birthday. Acharya: Makers Of Chiranjeevi Starrer to Cut Down on the Film’s Budget?

Veteran actor of Telugu Cinema, Megastar Chiranjeevi, would be celebrating his 65th birthday on August 22. As per a report in Tollywood.Net, the makers of Acharya are planning to share the first look poster on the same day. If it is true, then it would indeed be one of the best surprises for all his fans. However, there has been no official announcement made on it yet. Acharya: Kajal Aggarwal Has Not Walked Out Of Megastar Chiranjeevi Starrer, Confirms Actress’ Team.

Acharya also features Kajal Aggarwal as the leading lady. Chiranjeevi’s son Ram Charan would reportedly be seen in a cameo appearance; he’s also producing this film under the banner of Konidela Production Company. Besides this, the other project that Chiranjeevi has in his kitty is the Telugu remake of the blockbuster Malayalam film, Lucifer and it would be directed by Sujeeth.

(The above story first appeared on LatestLY on Aug 05, 2020 02:25 PM IST. For more news and updates on politics, world, sports, entertainment and lifestyle, log on to our website latestly.com).