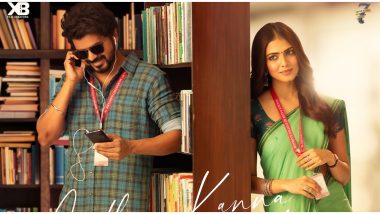 Malavika Mohanan is celebrating her birthday today. The actress will soon feature with Vijay and Vijay Sethupathi in the film Master. So, taking to Twitter, director of the upcoming film, Lokesh Kanagaraj, wished the birthday girl with a new picture. Earlier, the director had shared a picture of the actress for fans to put it up as their common DP. The tweet was liked over 28 thousand times. Malavika Mohanan Reveals Master is Different From Anything Made in Tamil Cinema Before, Says 'It Will Be a Treat For Vijay and Vijay Sethupathi Fans'.

In the new poster, Vijay and Malavika are in a library. Instead of focussing on a book, Vijay's character is listening to audio on his phone with earphones. Malavika is standing nearby. Some fans cropped out Malavika from the poster and said that their focus is only on 'Thalaivan'. In the nationwide film industry that only uses female characters as props or plot device, this is no surprise. Happy birthday Malavika, our wish for you, and all the other actresses, is that you find due relevance in Indian cinema.

Check Out The Birthday Wish To Malavika From The Maker Here:

Sharing her experience of working on the film, the actress has said, "It was like a big college picnic".  She added, "Vijay sir, has become a friend now. With him, I share a fun, buddy space."

(The above story first appeared on LatestLY on Aug 04, 2020 12:59 PM IST. For more news and updates on politics, world, sports, entertainment and lifestyle, log on to our website latestly.com).