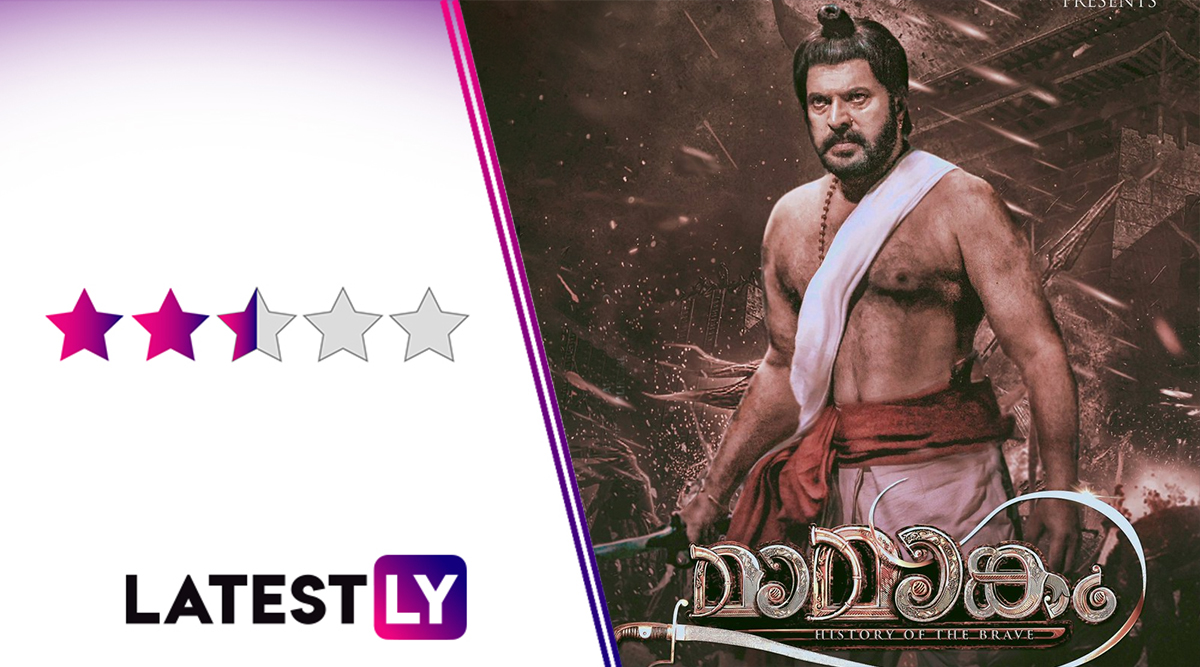 Mamangam Movie Review: In Mahabharata, the Pandava warrior Arjuna had to spend a year incognito (along with his brothers and wife) as a woman, Brihannala, in King Virata's palace. And he ended this phase of hiding by taking on a Kaurava army in a battle. In M Padmakumar's Mamangam, I expected something similar from the slighted Chankothu Valiya Panicker (Mammootty), after his Chaveru pada (suicide warriors) was defeated and killed in a Mamankam festival. Taking on the garb of Kurupachan, an effeminate keeper of a courtesan house, Panicker hides his real self from his family and his enemies. Unlike Arjuna, though, it isn't revenge that Panicker is seeking. Mammootty’s Fan Changes Wedding Date for His Upcoming Film ‘Mamangam’.

Mamangam is based on the 17th-century festival,, conducted every 12 years, that used to take place in Kerala. It became a bone of contention between the Zamorin rulers, who took control of the festival, and the Vallavukadu clan. The despotic Zamorin ruler uses the festival to reiterate his authority, while Vallavukadu kingdom sent their warriors for a suicide mission during the event - either to kill the king and overthrow the Zamorin's rule. Or be killed in the name of honor and revenge.

But Panicker makes an escape during the time he attended Mamangam and he is labelled as a coward for doing so. 24 years later, Panicker's kin, Anniyan (Unni Mukundan) and his 12-year old fearless nephew Chanthunni (Achuthan) are blessed by the Devi to take another suicide mission for the Mamankam. As their family members are devasted by this, Anniyan and Chantunni leave for the path of presumably no-return, while a silent guardian watches over them.

Let's clear something here - Mamangam is not the remake of the 1979 Malayalam film Mamankam. Even though the setting isthe same, scenarists Sajeev Pillai and Shankar Ramakrishnan have opted to tell a new story, which has its moments.

M Padmakumar had successfully managed to give Mamangam a rich and ambitious feel. The production values are outstanding for a film that costs a fraction of most of the Bollywood mainstream films. The scenes at the Mamankam festival are eye-catching, with appropriate use of colour and set design. The cinematography by Manoj Pillai projects the film's grandiose, but at a couple of places, the frames looked ordinary. Overall, though, Mamangam is an impressive feat when it comes to technical values.

Now let's talk about the narrative, and here's where things become interesting. Unlike the Prem Nazir film or even what the trailers of Mamangam suggested, the movie is not just about a bloody feud between good and the bad. For a film about suicide fighters and code of honour, Mamangam is, surprisingly, anti-war. It delves into the discussion of wasting blood over traditions and honour, and has the protagonist even criticise the honour code of clans that allows its warriors to get mercilessly slaughtered. For the last couple of years, we have been seeing period dramas that have the protagonists scream hoarse about their honour and valour, so Mamangam going the other way round is pleasantly subversive. Mamangam: From 1982 to 2019, Mammootty’s Transformation Through Historical Sagas Proves He Is the Fittest Malayalam Superstar!

That's, however, the best thing I can say about the screenplay of the film, that loses its focus quite often, keeps key characters out of action for long, and wastes a lot of time in developing needless side-tracks. After Anniyan and Chantunni leave for Mamankam, there is a sudden shift to a murder investigation in the courtesan house. It allows us to meet the beautiful head courtesan Unnimaaya (Prachi Tehlan), the cunning Valluvakonathiri (Siddique) and the re-entry of Panicker as Kurupachan. But apart from having the novelty of seeing Mammootty exploring a feminine side of acting, this subplot just stretches the movie's runtime and doesn't leave much of an impact.

Another flaw comes with the characterisation. Save for Panicker to some extent, none of the other characters is well developed, including Anniyan and Chantunni themselves. Even Siddique's antagonist, who starts off on an intriguing note as Zamorin's shrewd investigator and the king's chief bodyguard, becomes a one-note villain by the end of the film.

Watch The Trailer of Mamangam:

As for Mammootty's character, the movie ignores him for long patches, especially in the first half. But when he arrives, he arrests your attention. There are shades of his iconic Chanthu from the classic Oru Vadakkan Veera Gatha in Mammooty's Panicker. Both the characters have been labelled as a coward by their peers, though they are far from that. But what made Chanthu such a fantastic character was that the writing made him a flawed but sympathetic figure, despite the folklore giving a different impression. Unfortunately, for Panicker, we are never able to connect with the character that well, even if he does fascinate us with some novel traits. There is also a tendency to make him a superhero during the fight scenes (Panicker can throw a shield better than Captain America), which wasn't the case with Chanthu.

And yet, Mammootty fans could be disappointed with what the movie offers to do with his character in the third act. Without spoiling much, Panicker's turn here does make perfect sense in writing, with what his character has evolved into. But you can't really explain that to a diehard fan who wants to see his hero do typical hero things in a film that kind of gave that impression pre-release. Blame it on the promotions, if you can.

There are many occasions in the movie, especially, in the second half, where the film's philosophical ramblings sound pretentious. Like how can you believe a movie that talks of embracing peace, when in the previous scene, it had a long battle scene with stylised, slo-mo stunts.

Even the action choreography is of a mixed bag affair. The sword-fighting sequences are done well, but the overexaggerated use of slow-motion and aerial stunt sequences take away much of the impact from the action. It feels unintentionally funny to see actors flailing their hands in mid-air when the director insists on making those shots run slowly.

M Jayachandran's songs and the background score add to the film's positive appeal, though. Even the costume designs deserve special mention.

Mammootty, once again, towers over the film with a magnetic performance. It was interesting to see him take on the garb of an effeminate character, and the actor plays well with this new turn. But it is Mammotty's experience that shines here, rather than what his character offers for him. Like, there is a scene where Panicker asks Chantunni (who is clueless about his identity) about his family and the kid's answer weakens him. The camera focuses on Mammootty's expressions in the scene, as he absorbs the tragic news, and it makes us realise how brilliantly gifted this actor is.

Unni Mukundan's amazing physique makes him apt for the role of the younger Panicker. His performance is genial at best, but it often pales when Mammootty is on screen. The much-talked-about young sensation Achyutan is impressive in the action scenes. But his performance feels almost robotic; it hardly captures the emotions that the character goes through in a particular scene. I know it isn't right to find flaws in a young actor like him, but Achyutan often carries a singular frowned expression, as if someone snatches his PS4 out of his hands.

Prachi Tehlan, in her Mollywood debut, is pretty and works well with her character. Siddique is okay as the villain. The rest of the cast, which includes Tarun Arora, Anu Sithara, Kaniha, Maala Parvathi, Suresh Krishna, Manikkutan, Manikandan Achari perform their parts in a decent manner.

- Mammootty Kept Out of Action For Prolonged Period

The much-hyped Mamangam is a visual feat with a strong showing from Mammootty. But the film fails to cash in on the opportunity to create marvellously designed historical thanks to a winding narrative. At the same time, Mammukka fans may not be happy with the subversive turns Mamangam takes, especially in the second half.