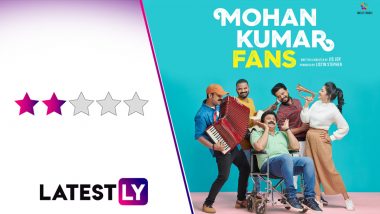 Mohan Kumar Fans Movie Review: Mohan Kumar (Siddique), the eponymous protagonist of Jis Joy's March release, now streaming on Amazon Prime Video, is an actor who just made a successful comeback to cinema. Once upon a time, he was a very popular lead actor in Malayalam cinema, but with the arrival of Mammootty and Mohanlal, Mohan Kumar and many others like him got sidelined in the process. Now through a new film, Mohan Kumar has not only come back with a bang, but his admirers also believes he can get a National award. Mohan Kumar Fans Actress Anarkali Nazar Wishes Kunchacko Boban With This Lovely Post On His Birthday!

Then we meet Krishnanunni (Kunchacko Boban), a gifted singer who leads the church's choir, leading to a nice representation of inter-religious harmony that we are now losing every day. Krishnanunni who comes from a household with limited means, soon becomes Mohan Kumar's driver and later his well-wisher. He also takes part in a singing reality show that also has Mohan's daughter Sreeranjini (Anarkali Nazar) as a contestant.

We also get to meet Prakash (Mukesh) a producer who is a friend of Mohan, and is trying hard to get his next film rolling. There is Krupesh (Vinay Forrt), a popular youth star whose narcissism leads to some funny moments in the film.

Mohan Kumar Fans begins with a scene where Krishnanunni and Sreeranjini are seen trekking on a snow-capped hilly terrain. We hear Krishnanunni's narration as he says this trip is for Mohan Kumar, setting tone to what to expect ahead as we begin on the former star's comeback journey.

Now I have liked Jis Joy's previous work, which includes Bicycle Thieves, Sunday Holiday and Vijay Superum Pournamiyum. There is a wholesome goodness in his movies that makes for some nice and safe family entertainment. Sunday Holiday is one of my fave go-to Malayalam entertainers in recent times. With Mohan Kumar Fans, Joy is teamed with Sanjay-Bobby, one of the most exciting screenwriting duos in Malayalam cinema. Though I was a let down by some of their recent attempts, notable Mammootty's political drama One. One Movie Review: Mammootty’s Political Thriller Loses an Important Discussion in Its Slo-Mo Idol Gazing.

Still this promises to be a nice combo, and it also helps that Mohan Kumar Fans has a nice ensemble cast featuring likeable actors like Boban, Siddique, Vinay Forrt, Mukesh, KPAC Lalitha among others.

The likeable goodness of Jis Joy's earlier efforts also extends to his new film, and that one main reason why Mohan Kumar Fans makes for a one-time harmless watch. Sadly, though, this one could have been more than that, if it had only stuck to just one of its plotlines - Mohan Kumar's return to cinema.

Through this storyline, the makers want to pay a tribute to all the actors in the wonderful film industry. In fact, the final line of the film is about how being a mere actor in a field where the likes of Prem Nazeer, Sathyan, Thikkurissi, PJ Antony, Mammootty and Mohanlal have ruled is a blessing enough (notice the casual sexism in ignoring the female artistes). Nice sentiments, sure, only if Mohan Kumar Fans would have backed that line with a better content. Instead, we see Mohan Kumar's so called 'fans' needlessly raising his hopes over a National Award. While the movie never goes into the political machinations of how National Awards works these days, maybe someone should have advised Mohan to tweet niceties about a certain political party!

After getting emotionally manipulated by his well-wishers - who need enemies when we have 'fans' like these - we get into a melodramatic turn when Mohan Kumar gets hospitalised after suffering a heart attack. This 'will he survive or not' drama gets more complicates as Mohan now awaits his National Award win before he goes for surgery, and Krishnanunni and co realising that it may never happen. What happens next may feel mildly interesting if the tension doesn't feel manufactured for the sake of it or that it didn't reek of lack of originality. Just let me say here that the conclusion to this plotline bears a strong resemblance to Nana Patekar and Danny Denzongpa's track in the Hindi film Hattrick! Nizhal Movie Review: Kunchacko Boban and Nayanthara’s Psychological Thriller Fails To Make Best Use of a Captivating Central Mystery.

The familiarity doesn't end here. Vinay Forrt's whole track works nearly separately from the main storyline, occassionaly making its presence felt in Mohan Kumar's story. While the actor is hilarious in the role, it had plenty of shades from the Saroj Kumar track from Udayananu Thaaram and its sequel, just an updated take of that. Interestingly, all the three films has Sreenivasan (wasted in an inconsequential role here) and Mukesh, who once again plays a producer who thinks himself as a backer of good cinema but ends up chasing a superstar.

Even more annoying is the subplot about Krishnanunni and Sreeranjini's reality show, that doesn't add much value to the plot, just one fancy song and more minutes to the runtime. I understand that, be it Krupesh's comic track or this subplot, they are used to reflecting the present pop culture prevalent in Malayalam entertainment. But when pitted against the main storyline, none of them do anything special to each other.

Towards the end, even the film's attempt to pull off of a Sunday Holiday-like twist comes more as a deception rather than a pleasant surprise.

The performances are mostly likeable, though some actors get little to do like KPAC Lalitha, Saiju Kurup, Alencier Ley Lopez et al. Siddique and Kunchacko Boban lend their versatility to their roles, and do a decent job with the parts. The songs by Prince George are okay.

- Some Nice Feel-Good Moments, Bettered By the Performances

- Struggles With Writing, Pacing and Lack of Originality

Mohan Kumar Fans can be passed off as an okay-ish family fare but coming from some talented hands involved, that's a disappointment. Thanks to its meandering screenplay and manufactured twists, it's hard to be a 'fan' of Jis Joy's latest work, despite its syrupy tribute to (male) actors of Malayalam industry. Mohan Kumar Fans is streaming on Amazon Prime Video.

(The above story first appeared on LatestLY on May 25, 2021 07:12 PM IST. For more news and updates on politics, world, sports, entertainment and lifestyle, log on to our website latestly.com).