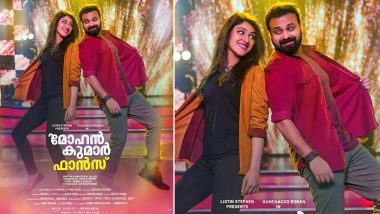 Kunchacko Boban has turned a year older on November 2. On this special occasion, there are several industry members and fans across the country who have showered the charming actor of Malayalam Cinema with heartwarming wishes. But the day has turned even amazing for the actor as the first look posters from his two upcoming films have been released – Nizhal and Mohan Kumar Fans. It is indeed the perfect way to celebrate Chackochan’s (as he is fondly called) birthday! Nizhal First Look Poster: Makers Introduce Kunchacko Boban’s Character Mr John Baby On The Occasion Of His Birthday!

Anarkali Nazar would be seen sharing screen space with Kunchacko Boban in the upcoming Malayalam comedy drama titled Mohan Kumar Fans. Directed by Jis Joy, the one who has helmed films such as Bicycle Thieves, Sunday Holiday and Vijay Superum Pournamiyum, his upcoming flick will feature the lead actors as singers. The first look poster, set against the backdrop of a show, features the lead stars in a casual and chirpy avatar. Anarkali wished her co-star with a lovely post that read, “Happiest Birthdaaay wishes to our evergreen and super cool Chackochan !! @kunchacks Wishing all happiness and success.” CONFIRMED! Kunchacko Boban Starrer Anjaam Pathiraa To Be Remade In Hindi (Read Statement).

About Anarkali Nazar’s character in Mohan Kumar Fans, the director had earlier told TOI, “Anarkali’s character Sreeranjini is a singer who takes part in reality shows in the film. She is also a struggling interior designer.” The film’s script has been penned by Bobby – Sanjay, whereas Prince George and William Francis have been roped in to compose the film’s music.

(The above story first appeared on LatestLY on Nov 02, 2020 12:32 PM IST. For more news and updates on politics, world, sports, entertainment and lifestyle, log on to our website latestly.com).