Nizhal is a psychological thriller directed by Appu N Bhattathiri. The movie stars Kunchacko Boban and Nayanthara in the lead. Nizhal, released in theatres on April 9, is now streaming on Amazon Prime Video. 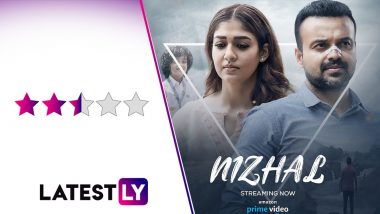 Nizhal Movie Review: Kunchacko Boban has two consecutive releases on OTT with Nayattu coming out on Netflix on May 9, while Nizhal arrives on Amazon Prime Video on May 11. Both films had releases in theatres and got diverse reactions, and after watching both kinda back-to-back, can figure out why. While Nayattu is a political cop thriller that gets a bit too realistic (read: downbeat), Nizhal is more of a psychological thriller with hints of supernatural themes. Also Nizhal, directed by editor-turned-filmmaker Appu N Bhattathiri, has the vivacious Nayanthara giving company to Mr Boban. Nizhal: Kunchacko Boban And Nayanthara Team Up For A Malayalam Movie!

The striking feature, apart from this interesting lead casting, is that Kunchacko Boban gets to wear a mask at least about half the screentime. It prompts one of the characters to call him 'Nightwing'. For those who are unaware of who Nightwing is, he is a DC superhero icon who used to be Batman's sidekick and is also the lead in the TV show Teen Titans.

But Boban's character John Baby is no superhero. He is a district magistrate who has to wear the mask to protect his nose after recovering from a surgery. It is not just wearing the mask that Baby has to bear - he is also suffering from PTSD that makes him hallucinate thunderstorms. He is also not liking the undue attention his mask-wearing is bringing from people - one person even referring to him as 'Jose Prakash'. Only Nitin (Izin Hash), the young son of a single mother Sharmila (Nayanthara) sees him as cool, getting Baby to crack a proper smile for the first time since his accident.

What brings Baby to Nitin form the crux of the mystery in the film. Nitin writes a short story that creates a mini scandal in his school for being about a brutal murder. This is brought to the notice of Baby, who decides to explore how true the story is. How Baby gets involved in this kid's storyline feels very fake, like the bird that watches an accident in the opening scene. Baby tells his best friend and his wife that the kid might be the key to help him to deal with his trauma, and vice-versa, but nothing of that sort really happens.

Still, I found the central mystery very much intriguing and baffling, especially when Nitin's story uncovers the recovery of a 30-year-old dead body from a swamp. And he has more stories to tell. Is someone supernatural communicating through Nitin's stories? Has the killer managed to get in touch with the child? Does the kid's dead father has anything to do with the whole mystery?

Obviously, I am not going to reveal the twist here, but the reveal didn't disappoint me - it was unexpected and really ingenious. There is some smartness in how the whole mystery angle is incorporated in the story. Especially in the first half.

What lacks the smarts is how things lead up to its discovery - with Baby accidentally stumbling upon the secret instead of any use of ingenuity - and how it pans out later. The use of some red-herring-style constructed scenes, especially in the second half, turn out to be irksome and only stretches the movie, especially the sequence where Baby and Sharmila visit an old acquaintance in Hogenakkal. Admit it is here where Baby stumbles upon the reveal, but there could have been a better way to construct the sequence.

Even the scenes post the reveal only pass muster, with the makers trying to add a Manichitrathazhu touch to the proceedings. There was another needless subplot of a comical policeman trying to follow Baby everywhere. Baby's PTSD episodes, a crucial plot point in the first half, is conveniently sidelined in the second half. The climax is a downer. Nayattu Movie Review: Kunchacko Boban, Joju George and Nimisha Sajayan Star in One of the Best Cop Thrillers in Recent Times, if Not the BEST!

The performances are decent, though I have seen Nayanthara do better in even more average movies. Kunchacko Boban is quite good.

- The Intriguing First Half and a Smart Suspense Reveal Twist

- A Weak Second Half

Nizhal could have been a fantastic psychological thriller if only the treatment was tighter and it opted for a more better ending. In its present form, it feels like a pale shadow of what it intended to be. The movie is streaming on Amazon Prime Video.

(The above story first appeared on LatestLY on May 11, 2021 03:35 PM IST. For more news and updates on politics, world, sports, entertainment and lifestyle, log on to our website latestly.com).