Neeraj Madhav and Deepthi Janardhan have been blessed with a baby girl. The Malayalam actor has announced the good news on Instagram. 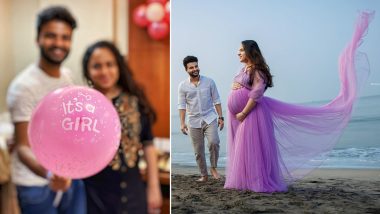 Neeraj Madhav and Deepthi Janardhan have been blessed with a baby girl. The Malayalam actor has announced the good news on Instagram by sharing an image of a pink coloured balloon that has ‘It’s a girl’ written on it. Neeraj, known for his role in the movie Oru Vadakkan Selfie, announced about the arrival of his daughter with the picture and a caption that read, “We’re blessed with a baby girl!!” His wife Deepthi also shared a picture from her maternity photoshoot, in which she can be seen flaunting her baby bump and wrote, “When two became three ..! #blessedwithababygirl”. All You Need to Know About Malayalam Actor Neeraj Madhav Who Impressed You As Moosa Rahman in The Family Man.

Neeraj Madhav and Deepthi Janardhan dated for a long time and then on April 2, 2018, the couple tied the knot. The adorable couple often gives a glimpse of their fun-filled family life. And now fans of this duo are eagerly waiting for Neeraj and Deepthi to share the name of their first child and also a picture of the cutie pie. Neeraj Madhav Gets Married To Deepthi in a Beautiful Ceremony; View Pics Inside.

Neeraj Madhav is known for his works in Malayalam Cinema. He has acted in movies such as Memories and Drishyam after being noticed by director Jeethu Joseph. He is also popularly known for his role Moosa Rehman in the web-series The Family Man that streamed on Amazon Prime Video.

(The above story first appeared on LatestLY on Feb 24, 2021 03:15 PM IST. For more news and updates on politics, world, sports, entertainment and lifestyle, log on to our website latestly.com).