If one were to consider just the business from the Tamil-speaking circuit, PS: 1 is the biggest ever, beating both 2.0 and Vikram (which minted Rs 372 crore). Read the full story here. 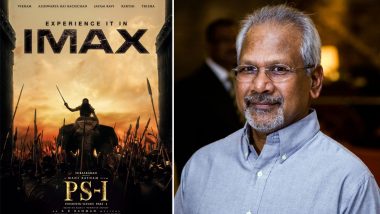 Mani Ratnam's epic movie Ponniyin Selvan: 1 has smashed box-office records as it stands as one of the biggest Tamil movies of all times, reports Pinkvilla. The film, which is on the last leg of its theatrical run, is also available on OTT but the numbers cranked up by the film are just behind the Rajinikanth-starrer 2.0. It has effectively beaten the Kamal Haasan, Fahadh Faasil, Vijay Sethupathi and Suriya-starrer Vikram, which released earlier this year. Ponniyin Selvan 1 Ending Explained: Who is 'Oomai Rani' and How Does the Cliffhanger Climax of Chiyaan Vikram, Aishwarya Rai Bachchan-Starrer Lead to PS2 (SPOILER ALERT).

Overall, Ponniyin Selvan: 1, which delves into the Chola dynasty's power conflicts as Emperor Sundara Chola's health declines, is the second highest-grossing film ever from Kollywood, just behind 2.0 which collected Rs 508 crore in India and another Rs 665 crore worldwide in 2018, according to Pinkvilla. Amul Promotes Its Brand Around the Release of Ponniyin Selvan 1; Says ‘Know Your Mani’s Worth’.

If one were to consider just the business from the Tamil-speaking circuit, PS: 1 is the biggest ever, beating both 2.0 and Vikram (which minted Rs 372 crore). It has emerged as the highest-grossing film in Tamil Nadu, and also the first film to cross the Rs 200 crore in the state so far, collecting just short of Rs 222 crore.

The film performed strongly overseas as well, making nearly $21 million, beating the $19 million of '2.0', in the traditional markets and setting many new benchmarks for Kollywood. The film so far has collected Rs 495.50 crore worldwide.

(The above story first appeared on LatestLY on Nov 28, 2022 04:14 PM IST. For more news and updates on politics, world, sports, entertainment and lifestyle, log on to our website latestly.com).