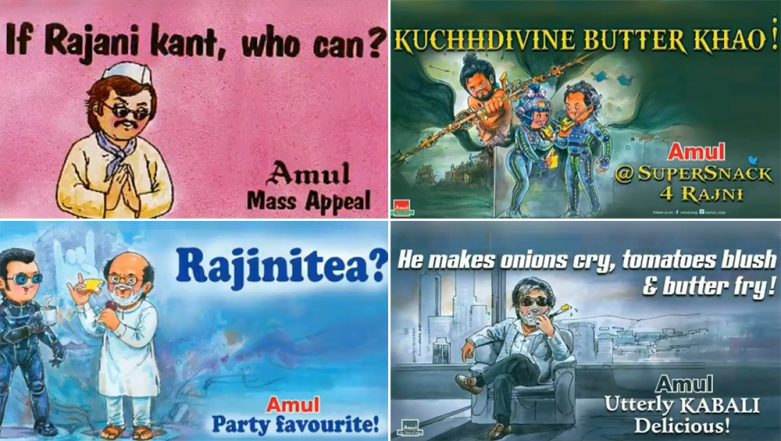 The trend '44 Years Of Unmatchable Rajinism'  is all over the internet. As the veteran actor, Rajinikanth completes 44 years in the film industry on August 18, fans of the megastar have taken over Twitter to celebrate the work of their favourite actor and his contribution to the industry over the years. It was on August 18 that the audiences saw the amazing actor's entrance in Kamal Haasan’s Apoorva Ragangal and ever since there has been no looking back. After that day, Rajinikanth changed the face of Tamil cinema. Rajinikanth Completes 44 Years in the Entertainment Industry, Fans Trend #44YearsOfRajinismManiaBegins.

While fans and well-wishers of the actor are busy celebrating this big day, Amul too tweeted a small video featuring all of the topicals that they have presented over the years as they celebrated the big achievements and milestones in the Thalaivar's career. Sharing the video on their Twitter account, Amul captioned it as, "Congratulations Rajnikanth on #44YrsOfUnmatchableRAJINISM."

The 68-year old actor began his career with supporting roles, only to later become a sensation in the industry. He also took up roles of antagonists in films like Pathinaaru Vayathinile and Aadu Puli Aatam but soon became the legendary hero that fans can't seem to get over. Rajinikanth Completes 44 Years in the Film Industry, Fans Celebrate It With #44YearsOfRajinismCDP Trend.

Among his upcoming films, Rajinikanth will next be seen in AR Murugadoss's Darbar. The veteran actor is playing the role of a police officer in the film. Major portions of the film were shot in Mumbai. Actress Nayanthara has been paired opposite him in this film. Darbar is slated to release over Pongal 2020.