Fans wait to catch a glimpse of superstar Rajinikanth, who is fondly called as Thalaivar. Here's an amazing treat for all Thalaivar fans! There are two pics of Rajinikanth doing rounds on the internet. 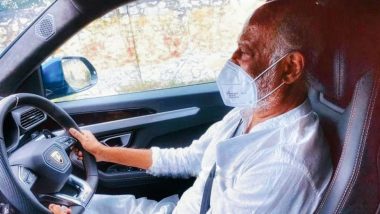 Fans wait to catch a glimpse of superstar Rajinikanth, who is fondly called as Thalaivar. Many celebs have been posting intriguing pics and videos across social media platforms amid this lockdown period. But it is not that often we get to see Rajinikanth giving a glimpse of his off screen life. The superstar is vocal about ongoing issues and does share his opinions on Twitter. But fans wait to see a picture of him. Here's an amazing treat for all Thalaivar fans! There are two pics of Rajinikanth doing rounds on the internet. Rajinikanth's Daughter Soundarya Shares an Adorable Click of her Son Imitating his Grandfather's Petta Pose.

In one of the pictures, Rajinikanth is seen along with his daughter Soundarya, son-in-law Vishagan Vanangamudi and grandson Ved. It was indeed the sweetest surprise for all fans of the superstar to see the family together in the same frame. It is after a really long time that fans have gotten to see Rajinikanth and his family. And did you spot the Lamborghini right behind them? Well, the other picture that has taken the internet by storm is the pic of Rajinikanth wearing a face mask and driving this hot wheel. Ever since this pic has hit online, fans have been trending #LionInLamborghini on Twitter. Annaatthe: Superstar Rajinikanth’s Film Is All Set for Pongal 2021 Release.

Rajinikanth With His Family

And See What Fans Have Said:

That's the moral and

Age Is Just A Number

Lamborghini style is based on Spanish bullfighting. Is this symbolic reference of Thalaivar’s political next steps?#Annaatthe @rajinikanth

Meanwhile, there have been reports doing rounds that superstar Rajinikanth would be officially launching his political party in November. However, there has been no official update on it yet. On the work front, Rajinikanth will next be seen in Annaatthe that also features Meena, Kushboo Sundar, Keerthy Suresh, Nayantara, Prakash Raj, Soori, Sathish and Vela Ramamoorthy. This Tamil film is directed by Siva.

(The above story first appeared on LatestLY on Jul 21, 2020 04:32 PM IST. For more news and updates on politics, world, sports, entertainment and lifestyle, log on to our website latestly.com).