Mission Mangal, Saaho, Batla House and Sacred Games 2 will hit the screens on Independence Day 2019. It is Prabhas-Shraddha Kapoor starrer Saaho that the fans has chosen as their first pick for the long weekend. What's yours? 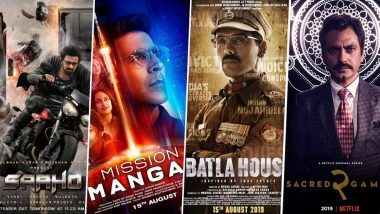 This Independence Day 2019, the cine-goers are blessed with interesting cinematic pieces. The long weekend in August has four big releases in the store and naturally, the fans will be divided. Mission Mangal, Saaho, Batla House and Sacred Games 2 are meeting the audience in this slot. The buzz of all these four projects was way too high to ignore. So, we conducted a poll to see which movie has managed to keep the fans intrigued the most. The answer is - Saaho! Saaho Teaser: Twitterati is Going Gaga over Prabhas and Shraddha Kapoor's Action Entertainer.

Maximum of them have chosen to vote Prabhas-Shraddha Kapoor starrer Saaho to watch during the long weekend. That is so expected! After all, this Sujeeth directorial is Prabhas' first outing after his five-year-long dedication to SS Rajamouli's Baahubali franchise. Then, the second slot was clinched by Netflix's series Sacred Games 2. The second season finally answers the questions left answered by the first one. Also, the new season has the addition of new characters of Kalki Koechlin and Ranveer Shorey. On the third is Mission Mangal, the space drama that has heavy star cast of Akshay Kumar, Vidya Balan, Taapsee Pannu, Nithya Menen, Kirti Kulhari, Sharman Joshi, H. G. Dattatreya and Sonakshi Sinha. The last is, sadly, John Abraham-Mrunal Thakur starrer Batla House. Shraddha Kapoor: Playing a Police Officer in Saaho is a Special One Because You are Representing Such an Integral Part of the Country.

Check out the poll result below: 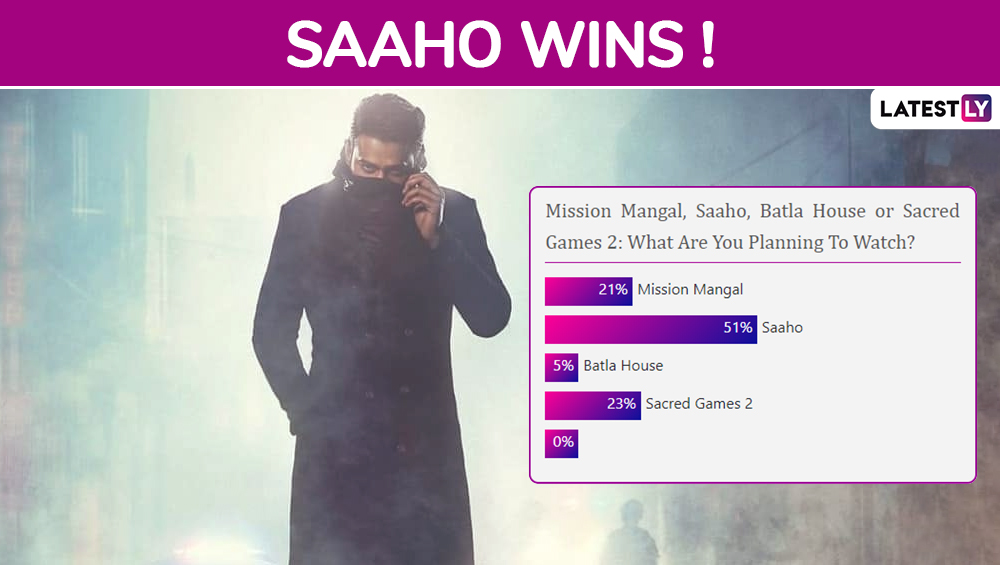 It's interesting to see how Prabhas has gained the maximum number of votes despite being a Tollywood star. He has a pan-India appeal now, thanks to his hunky appearance in the mega movie. Also, the talking about the clash between Batla House and Mission Mangal, clearly, the latter one has an upper hand. Well, it's still a month away so the scenario might just by then. Tell us your thoughts on the same in the comments section below.

(The above story first appeared on LatestLY on Jul 11, 2019 05:36 PM IST. For more news and updates on politics, world, sports, entertainment and lifestyle, log on to our website latestly.com).