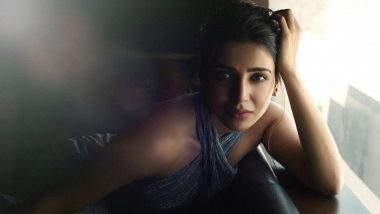 Southern star Samantha Akkineni has garnered a fan following of 12 million on Instagram. The actress shared the news on Monday with a new picture and also thanked her fans. "12 million Now and forever. Thankyou for this amazing shot @vaishnavpraveen @thehouseofpixels," she wrote alongside the image that has Samantha posing on a sofa in a shimmery dress. Samantha Akkineni Has the Best Response to a Fan Asking Her If She’s Pregnant! (Watch Video)

The actress recently shared that she starts her weekend by doing 108 Surya Namaskars. Samantha has made a name for herself in Tamil and Telugu film industries. She is known for her performances in films such as "Ye Maaya Chesave", "Neethaane En Ponvasantham", "Eega", "Mersal" and "Rangasthalam". Samantha Akkineni Promises The Family Man Season 2 Will Be a ‘Crazy Ride’ As She Dubs For the Amazon Series (View Post)

She impressed all with her role in "Super Deluxe" last year. She will soon be seen in the second part of "The Family Man".

(The above story first appeared on LatestLY on Sep 14, 2020 05:50 PM IST. For more news and updates on politics, world, sports, entertainment and lifestyle, log on to our website latestly.com).